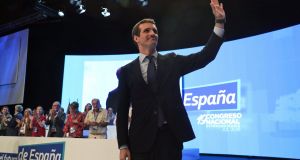 The new leader of the Spanish conservative Popular Party, Pablo Casado, reacts after being elected to the position at the party’s national congress, in Madrid. Photograph: ZIPI/EPA

The new leader of Spain’s main opposition Popular Party (PP) promises a return to traditional conservative values for the party and to oppose attempts by the government to engage in dialogue with Catalan secessionists.

Mr Casado won over party delegates with a campaign that called on the PP, which was removed from power in June by a no-confidence vote, to be proud of its roots in the political right.

Although he rose and hugged Mariano Rajoy as his victory was announced, the PP’s new leader appears to draw little inspiration from his predecessor. Mr Rajoy offered little in the way of an overarching vision of Spain other than a determination to stabilise its economy. Mr Casado’s leadership is more likely to hark back to that of José María Aznar, the bullish PP prime minister between 1996 and 2004, who portrayed himself as the scourge of terrorism and aligned himself with neocons in Washington.

The editor of El Periódico newspaper, Enric Hernàndez, even went as far as to say that the PP’s new leader is “a rejuvenated version of Aznar, without the moustache”.

The fact that Mr Casado once worked at the former prime minister’s FAES think tank appears to support that theory, as does his unapologetically right-wing message of recent weeks.

“We are the party of life and the family,” he told the party on Saturday. His socially conservative message has included not only opposition to the current law on abortion and a proposed euthanasia law, but also criticism of those who want to dig up victims of the Franco dictatorship from mass graves.

This strident conservatism also includes Mr Casado’s view on Catalonia. He has criticised his own PP government’s handling of the recent independence crisis as too soft. He has also attacked the new Socialist government’s bid to engage in dialogue with the northeastern region’s administration.

Instead, he has vowed to be “implacable with those who want to break up the unity of our country”.

This suggests that Mr Casado’s leadership could be more than a match for Ciudadanos, the relatively new party that has been threatening to supplant the PP as the dominant force on the right by appealing to Spaniards’ unionist sentiments. It would also appear to free up the political centreground to the benefit of Socialist prime minister Pedro Sánchez.

However, it is possible that the lurch to the right Mr Casado has promised was more of a campaign tactic than a genuine resolution.

Meanwhile, he has another, more personal, issue hanging over him, one which does little to help his bid to free the PP of its reputation for corruption. In the spring, it transpired Mr Casado had been awarded a master’s degree from a Madrid university without attending classes or sitting exams. A judge is examining allegations that he earned the degree fraudulently.