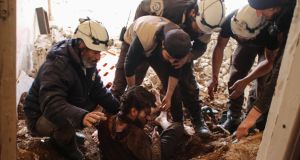 White Helmet members remove a victim from the rubble of a house following a reported air strike by government forces on a rebel-held area in Daraa. File photograph: Mohamad Abazeed/AFP/Getty Images

The Israeli military has extracted more than 400 members of Syria’s White Helmets civil defence group and their families, evacuating them to Jordan from the war zone in southwest Syria.

The unprecedented operation early on Sunday was carried out at the request of the United States and a number of European countries, including the United Kingdom.

The Israeli military spokesperson said the civilians were evacuated from the war zone in southern Syria due to an “immediate threat to their lives”, describing the operation as “an exceptional humanitarian gesture.”

An individual involved in the rescue told an Israeli TV station the effort was “one of the most moving operations. There were lots of children.”

The initial plan was to evacuate 800 White Helmets and their families – and earlier reports sugggested this had happened – but only 422 made it. The rest were reportedly trapped between areas controlled by the Syrian army and Islamic State fighters and their fate remains uncertain.

The Assad regime accuse the White Helmets of backing the rebels and having links to jihadist groups. The White Helmets deny such allegations and insist that have remained neutral throughout the conflict.

Israel is technically in a state of war with Syria but has not intervened in the Syrian civil war, although has carried out numerous strikes against Iranian military targets and Iranian-backed Shi’ite militia forces fighting alongside regime troops loyal to president Bashar al-Assad.

Israel has provided humanitarian assistance and has treated thousands of wounded Syrians in Israeli hospitals but has made it clear that will not allow the displaced refugees on the Syrian Golan to cross into Israel.

US officials said the White Helmets, who have enjoyed backing from the western powers for years, were likely to be targeted by Syrian forces as they retook control of the southwest, assisted by Russian air strikes.

The White Helmets operated in opposition-held areas across Syria during the civil war, risking their lives to save civilian lives during relentless government airstrikes and bombardments. Officially known as the Syria Civil Defence, the White Helmets, so called for their signature hard hats, have been lauded in the West for their work digging people out of the rubble after government airstrikes.

The White Helmets claim to have saved the lives of more than 100,000 civilians since they started operations in early 2013.Two hundred White Helmet volunteers have been killed and 500 injured.

The Syrian military, backed by a Russian air campaign, has been pushing into the edges of Quneitra province following an offensive last month that routed rebels in adjoining Deraa province who were once backed by Washington, Jordan and Gulf states.

The offensive has restored Syrian government control over a swathe of the southwest, strategic territory at the borders with Jordan and Israel.