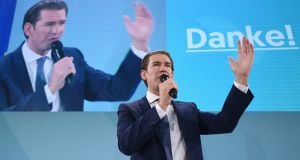 Austrian conservative leader Sebastian Kurz is heading back to power in Vienna, finishing well ahead in Sunday’s snap election after a slide in support for the country’s far-right.

Exit polls suggest the 33-year-old’s People’s Party (ÖVP) finished with nearly 37 per cent, up nearly six points on the last election in 2017. His coalition options are open after the populist Freedom Party (FPÖ), his former partner, saw a 10-point collapse in support to about 16 per cent after an early election prompted by a graft scandal and video sting.

“We are delighted and will do everything to honour this result in a respectful humble and grateful way vis–a-vis the voters.”

The other big winner of the poll was the Green Party, riding the climate protest wave, with 14 per cent in exit polls – up 10 points – and returning to parliament in Vienna as a possible coalition partner for Mr Kurz.

The liberal Neos, also a coalition option, finished on 7.5 per cent, according to exit polls, up two per cent.

The centre-left Social Democrats (SPÖ), once a dominant force in Austrian politics as a grand coalition leader, finished second but scored a disastrous 22 per cent in exit polls – down five points in 18 months.

The rise and rise of Mr Kurz – up 13 points in two elections since 2017 – puts him in pole position to dictate the terms of his next government. He may pursue a right/far-right alliance with the FPÖ pushing anti-immigrant and Islamophobic policy – or a progressive coalition with the Greens.

Turnout was high with an estimated 75 per cent voting in an election held just two years after the last. It was prompted by a secretly-recorded video showing former FPÖ leader Heinz-Christian Strache offering state contracts in exchange for political donations to a fake Russian oligarch’s niece.

Mr Strache lost his party leadership and is likely to be expelled from the FPÖ in the coming days as it struggles to contain a growing scandal over his expenses – under investigation by Austrian prosecutors. That investigation, and the instability of the FPÖ – could yet see Mr Kurz cool on reviving his last alliance with the populists. While election analysis suggest Mr Kurz’s ÖVP has 85 per cent policy overlap with the populist FPÖ, they signalled on Sunday evening they were not open to returning to power.

Another option – a centrist grand coalition with the SPÖ, and the norm in postwar Austrian politics – is a numerical possibility but politically unlikely for Mr Kurz.

“This is not the result we would have wished,” said Dr Pamela Rendi-Wagner, the SPÖ leader since last November. “It’s an interim stop on our path to something better.”

Compared with 2017, post-election analysis suggested Austrian voters are less concerned with migration and integration as the environment, returning the Green Party to parliament after they received a disastrous four per cent of the vote two years ago.

Difficult coalition talks loom if Mr Kurz shuns the populist option for an untested three-way Green-Neos coalition. While the conservative ÖVP has policy overlap with the liberal Neos, analysts suggest just 25 per cent overlap with the Greens. They are demanding serious climate change policy and a departure from anti-migration language and legislation as their price for support.

Before Sunday’s election Mr Kurz kept his options open, even suggesting an untested minority government as an option. Political analysts predict a long period of coalition talks while Austria is ruled by a caretaker government, in office since May, led by former judge Brigitte Bierlein.