Afghanistan election: turnout may have been as low as 20% amid Taliban threats

Preliminary count suggests lowest participation since 2001, with accusations of fraud 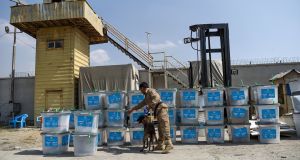 A sniffer dog checks election ballot boxes for explosives after they were unloaded from a truck at a warehouse in Kabul on Sunday. Photograph: Getty Images

Voter turnout in the first round of Afghanistan’s presidential election on Saturday may have been as low as 20 per cent, according to preliminary counts, amid threats from the Taliban to attack polling stations.

Afghanistan’s independent election commission said data from just over half the country’s polling stations showed about 1.1 million people had voted for one of the more than a dozen candidates vying to rule the war-torn country, including the incumbent president, Ashraf Ghani.

If the figures are consistent with the booths yet to report it would indicate that less than a quarter of the country’s 9.6 million registered voters cast their ballot on Saturday, a steep fall from the approximately 60 per cent of eligible voters who participated in the 2004 polls. An Afghan official told Reuters the turnout figure could be as low as 20 per cent. This would be the lowest level since the 2001 US-led invasion.

The Afghanistan Analysts Network said there were more than 400 reported attacks causing dozens of casualties across Afghanistan as the country voted, but none were significant enough to have disrupted the polling.

Nonetheless, the election was marred by accusations of fraud and misconduct, increasing fears of a contested result that could drive the country into further chaos amid resurgent violence by the Taliban, the Afghan national army and its western allies.

Ghani had called on Afghans to turn out and give a mandate to the incoming leadership to negotiate peace with the Taliban, which refuses to recognise the western-backed government it routinely labels a “puppet regime”.

The militant group, which holds more territory today than at any point since it was ousted in 2001, denounced the elections as illegitimate and warned that polling stations would be targeted. In response, the authorities deployed more than 70,000 police, troops and intelligence officials to secure polling stations and lock down major cities.

Sixteen people were wounded in an explosion at a polling station in a mosque in the southern city of Kandahar.

Female voters were also prevented from participating or were unwilling to do so given requirements they be photographed, something many in the religiously conservative country are reluctant to allow, according to Transparent Election Foundation of Afghanistan , a Kabul-based NGO.

The result will not begin to be known until October 19th, with a final announcement on November 7th. A run-off will be held among the two highest-polling candidates if none exceeded 50 per cent of the vote on Saturday.

Ghani’s chief rival for the role is thought to be Abdullah Abdullah, a veteran politician who narrowly missed out on the presidency after a 2014 election tarred by accusations of massive vote-rigging.

The US stepped in after that poll to negotiate a deal that made Ghani president and Abdullah the government’s “chief executive”, but the pair have spent much of the past five years bickering and both men have ruled out entering another unity government.

The poll was almost postponed to give more time for peace talks with the Taliban, but went ahead after Donald Trump tweeted that he had cancelled an American peace deal with the militants earlier this month.