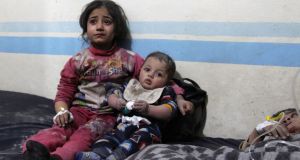 The Syrian army on Tuesday secured control of the entire length of the country’s main north-south highway, a major strategic and moral gain for the government.

The return of the Aleppo-Hama-Damascus sector of the strategic highway was accompanied by fierce fighting and bombing by Russian warplanes and Syrian army helicopters, one of which was reported shot down near jihadi-held Idlib city. The Syrian army retaliated by shelling the city centre.

While the Syrian government and Russia are determined to build on major territorial gains made over the past six months, Turkey seeks to block the army’s advance in al-Qaeda-held north-west Idlib, the last jihadi and rebel provincial bastion, and retake areas of Idlib and northern Aleppo province captured by the army .

A commander of a Turkish-allied militia faction, Khalid Rahal, told al-Jazeera that “a battle can break out at any moment”.

In recent weeks, Ankara, the Syrian government’s chief opponent, has dispatched 100 military convoys and boosted the number of troops in Idlib to 9,000, including an armoured brigade and two mechanised infantry brigades.

Turkish-surrogate militias have also reinforced their positions in neighbouring northern Aleppo province, where clashes have been taking place with the advancing Syrian army.

Turkey must carefully calibrate its operations since the Russian air force, which has supported the Syrian army in the Idlib offensive, commands Syria’s skies. Consequently, Turkey’s ground forces are vulnerable to aerial bombing if they mount major assaults on the Syrian army and its pro-Iranian militia allies.

On Monday, Russian military officials left Ankara following the failure of two days of de-escalation talks with their Turkish counterparts. The Russians’ departure coincided with Syrian army shelling at a new Turkish fortified base in Idlib, killing five, and eliciting Turkish retaliatory attacks on dozens of Syrian army targets.

Last week, a Syrian assault on a convoy that killed eight Turkish troops prompted Turkish president Recep Tayyip Erdogan to threaten harsh retaliation for assaults on Turkey’s dozen fortified bases in and around Idlib. He demanded the withdrawal by the end of this month of the Syrian army from Idlib territory captured by Russian and Iranian-supported government forces since last August.

US envoy James Jeffrey is due to visit Ankara today. He has said the Trump administration is “very, very worried” about the Syrian army campaign and urged Russia to halt it. “This is a dangerous conflict. It needs to be brought to an end. Russia needs to change its policies,” he said.

In a bid to counter Russia’s presence in government-controlled Syria, the US military is, reportedly, establishing additional bases in Kurdish-held north-western Hasakeh province, Syria’s oil-rich region.

The United Nations has estimated that since December 700,000 people have been displaced in north-western Syria, 100,000 during the past week. The area has a population of three million. In freezing temperatures and rain, 79 per cent need shelter and 59 per cent food, the UN said.

Turkey, which hosts 3.6 million Syrians, has closed its border with Syria.