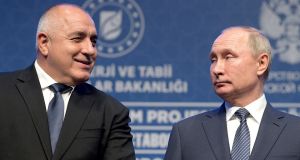 Moscow has sharply criticised Bulgaria after it expelled two Russians for alleged spying and charged three others in a mysterious poisoning case, in moves praised by the United States.

Sofia and Moscow were particularly close allies during the communist era. Russia retained strong economic influence in Bulgaria after it joined the EU and Nato and remains the country’s dominant energy supplier. Their traditionally solid relations have been shaken by a number of spy scandals in recent months, however.

Bulgaria’s foreign ministry announced on Friday that two Russian diplomats had been declared personae non gratae and given 48 hours to leave the country for “gathering information that constitutes a state secret.”

“We regard this step . . . as openly unfriendly and provocative and contrary to the constructive and traditionally mutually respectful nature of Russian-Bulgarian relations. We reserve the right to retaliate,” Moscow’s foreign ministry said in response, adding that Sofia had offered “no plausible evidence” for its allegations.

The spy spat became public a day after Bulgarian prosecutors charged three Russians with attempted murders. They are also being investigated for possible links to the 2018 nerve-agent attack on Russian former double agent Sergei Skripal in Salisbury.

They are accused of trying to kill Bulgarian arms dealer Emilyan Gebrev, his son and a manager at his weapons company with “an unidentified organophosphorus substance” in 2015. The accused have not been named publicly but prosecutors said international warrants had been issued for their arrest.

The three Bulgarians survived and investigators initially shelved the case.

After Mr Skripal and his daughter Yulia nearly died from poisoning by novichok in an alleged attack by Russian intelligence officers, however, Mr Gebrev raised his case again with Bulgarian police and British detectives visited Sofia.

The Bellingcat investigative website, meanwhile, discovered a suspected senior Russian military intelligence officer who was in Britain at the time of the attack on the Skripals was also in Bulgaria when Gebrev was poisoned.

The US embassy in Sofia praised “recent actions of the Bulgarian government to defend the country’s independence and sovereignty.”

It noted “the recent emergence of compelling information regarding a series of malign actions by agents of the Russian government within Bulgarian territory, resulting in the expulsion of three Russian embassy officers and the revocation of visas of two others on espionage grounds in the last four months.”

The embassy said Sofia had “produced evidence of Russia-supported malign activities occurring within the territory of Bulgaria over a number of years” and found that “several of the very same Russian agents who were responsible for a poisoning case in Bulgaria were involved in other malign activities across Europe.”

Mr Malofeev and Mr Reshetnikov have been linked to efforts to boost Russian influence in the Balkans, including a failed 2016 coup in Montenegro. Both men deny involvement in the alleged attempt to oust the country’s pro-western leaders.