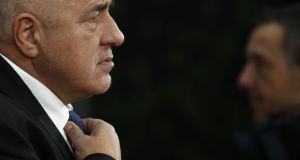 Bulgaria has tried to defuse a potential row with Moscow after accusing the head of a pro-Kremlin organisation in Sofia of espionage and banning two prominent Russian citizens from entering the country.

Prosecutors have charged Nikolay Malinov, chairman of the National Russophile Movement in Bulgaria, with “putting himself in the service of foreign organisations to work for them as a spy” and of laundering money sent by those Russian groups.

Mr Malinov allegedly worked on a plan to set up a television channel, think tank, political party and websites in Bulgaria that would promote closer ties with Moscow rather than with Sofia’s EU and Nato partners.

Deputy chief prosecutor Ivan Geshev said investigators discovered a document written by Mr Malinov outlining “the steps needed . . . to completely overhaul the geopolitical orientation of Bulgaria away from the West and towards Russia”.

The former Socialist Party deputy proclaimed his innocence and insisted he had only sought to “develop cultural, spiritual and social links with Russia”. He has been released on bail and faces up to 15 years in jail if convicted.

“Some are trying to put this on the same level with our relations with Russia. I do not see any reason to link the one with the other,” Bulgarian prime minister Boiko Borisov said on Wednesday, playing down the news.

“Everyone, including non-governmental organisations, has the right to carry on with their activities,” he added. “Some love Russia, some America, some Europe, but our geopolitical stance . . . is with the European Union and Nato.”

The Double-Headed Eagle is run by the so-called “Orthodox oligarch” Konstantin Malofeev, a tycoon known for his strong religious, nationalist and conservative views, who was placed on EU and US sanctions lists for backing Russia’s aggression in Ukraine.

The deputy chairman of the NGO is Leonid Reshetnikov, a former senior Russian foreign intelligence officer who led the RISS from 2009-2017.

Amid the espionage accusations, Bulgaria has now placed a 10-year entry ban on Mr Malofeev and Mr Reshetnikov, who have been linked to other efforts to boost Russian influence in the Balkans, including a failed 2016 coup in Montenegro. Both men deny involvement in that alleged attempt to oust the country’s pro-western leadership.

Sofia had particularly close ties with Moscow during the communist era, and Russia has retained economic influence in the Black Sea state and continues to be its dominant energy supplier.

Tempers flared this month however, when Moscow denounced comments from Sofia’s foreign ministry that the defeat of Nazi forces in Bulgaria 75 years ago led to decades of Soviet oppression.

Critics of Mr Borisov and his ruling Gerb party have suggested that the spying allegations may be part of a politically motivated bid to discredit the Socialists ahead of local elections next month.

“The Americans have started a ‘Russian spies in Bulgaria’ campaign,” Mr Reshetnikov wrote on Facebook.

Mr Malofeev, meanwhile, said he could “see the ears of western intelligence agencies and their minions in Bulgaria sticking out from behind this whole thing”.