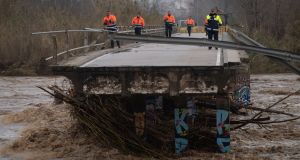 Several days of storm conditions in Spain have claimed at least 13 lives and left large swathes of the country flooded.

Storm Gloria hit Spain last weekend and since then it has brought torrential rain, hurricane-force gales, tidal swells and snowstorms.

On Thursday, the most recent fatality caused by the storm was confirmed, when the body of a man who had drowned while fishing in the sea was recovered in the northeastern region of Catalonia. Earlier, another man’s body was found in a car, also in Catalonia, where a total of four deaths have been registered due to the conditions.

Another body was recovered on Thursday evening in Catalonia, although it was not clear if the death was attributable to the storm.

“We are not going to be able to recover everything that has been lost,” said prime minister Pedro Sánchez, during a visit on Thursday to some of the areas affected. “There are a lot of emotions, memories, but we will be sure to use the resources, effort and determination to repair the damage.”

He announced an emergency cabinet meeting for Friday in order to co-ordinate aid for those affected.

Mr Sánchez visited areas of Catalonia and the Balearic Islands and also plans to travel to the Valencia region, which has been heavily affected.

The first fatality of the storm was in Asturias, in northern Spain, where icy conditions caused a driver to lose control of his van, killing a man at the side of the road on Sunday. But the storm subsequently moved east and the Mediterranean coast and Balearic Islands have borne the brunt of it in recent days.

Although conditions appeared to have eased somewhat on Thursday, there was still heavy rainfall, and several rivers in the northeast of the country burst their banks, causing flooding. That was the case with the river Ter in Girona, where the city’s authorities had to cut off the water supply temporarily.

In other areas local people were evacuated or told to stay indoors to avoid the flooding. Several bridges were washed away and many road and rail links were cut off.

The Ebro Delta was heavily flooded, as were many beaches along the Mediterranean coast. Local authorities in Deltebre and Alcanar, in the Ebro Delta, requested that their towns receive disaster zone status.

Francesc Vidal, director of the Ebro Delta natural park, said he expects the area to get back to normal in “several months”. He also said that weather events such as these “are more and more common and increasingly strong and they teach us the lesson that the delta is fragile and we have to act”.