Monitors warn of preparations for fresh surge of fighting in Ukraine

US and Russian envoys plan to discuss conflict on Friday 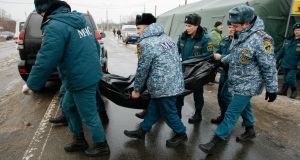 Local rescuers carry the body of a man killed by the shelling of a bus at the Olenivka checkpoint between Ukrainian controlled territory and the self-proclaimed Donetsk People’s Republic this week. Photograph: Alexander Ermochenko/EPA

Government troops and Russian-led militia in eastern Ukraine appear to be preparing for an escalation in fighting, international monitors warned on Tuesday, amid Kremlin condemnation of Kiev’s new legal stance on the grinding conflict.

The Organisation for Security and Co-operation in Europe (OSCE) mission said neither side was abiding by the 2015 Minsk agreement, which has failed to end fighting that has killed more than 10,300 people and displaced 1.6 million.

“Instead of fully complying, instead of withdrawing weapons, disengaging and de-mining, it seems the sides are in fact doing the opposite,” said Alexander Hug, principal deputy chief monitor of the mission.

“All across eastern Ukraine [we have] been observing readiness. Everywhere we observe indications that the sides are preparing to continue the conflict, or even escalate it,” he said via video link from the main separatist-held city of Donetsk.

“New trenches, more weapons, freshly laid mines – all indicating that the sides are preparing to ramp up this conflict rather than end it,” he added.

“It is a warning that should not be ignored.”

The activity on the battlefield coincides with preparations for a new round of talks between US and Kremlin special envoys for Ukraine, where a nearly four-year-old war has wrecked East-West relations and triggered international sanctions on Russia; Kurt Volker and Vladislav Surkov are due to meet in Dubai on Friday.

It will be their first encounter since the White House in late December approved the supply of lethal weapons to Ukraine, including high-tech Javelin anti-tank missiles. They are not expected to be delivered for several months, and Kiev has pledged to use them only “defensively” to fend off enemy attack.

Russia said the move would only lead to more bloodshed in the Donbas region, where it still denies fomenting conflict in the wake of Ukraine’s 2014 pro-western revolution and propping up separatist warlords with arms, fighters and finance.

Moscow also denounced the Ukrainian parliament’s approval of a Bill that redefines the separatist-held areas as “temporarily occupied territories”, officially names Russia as the “aggressor” state and declares it liable for all damage and losses caused by the fighting.

Russia claimed the Bill contradicts the Minsk pact, gives Mr Poroshenko “near-dictatorial powers” and is Kiev’s attempt to shift blame for the conflict onto Moscow. “This can only be called preparation for a new war,” Russia’s foreign ministry said.

Mr Poroshenko insisted this week that “neither the spirit nor the letter” of the Bill contradict the Minsk agreements, adding that he would sign it into law “as soon at it comes from parliament”.