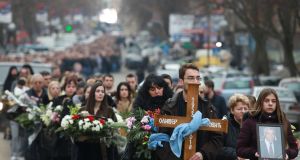 A cortege escorts a car carrying the coffin of Oliver Ivanovic, flanked by priests and family, to the northern outskirts of Kosovska, Mitrovica, in Kosovo on Wednesday. Photograph: Djordje Kojadinovic/Reuters

Kosovo has said it may ask for US help in finding the killers of one of the country’s main ethnic Serb politicians, as Serbian president Aleksandar Vucic announced that he would visit Serb areas of the divided state this weekend.

Thousands of people have paid their respects and lit candles for Oliver Ivanovic in the Serb half of Mitrovica in northern Kosovo since he was shot dead on Tuesday morning outside his office in the city.

Prosecutors from the country’s Albanian Kosovar majority and Serb minority are working on the case together, and say Mr Ivanovic was shot six times by unknown assailants who are believed to have fled in a car that was found burned out a few kilometres away.

Mr Vucic called the killing a “terrorist” attack and asked for Serbian security agencies to be allowed to join the investigation in Kosovo, which next month will mark a decade since it declared independence from Belgrade.

The murder prompted Belgrade officials to abandon EU-brokered talks with counterparts from Pristina, and stirred up lingering anger and suspicion between nations that fought a bitter 1998-9 war and still disagree over Kosovo’s status.

“The Kosovo police force has good relations with many organisations and we will invite the FBI if needed,” Kosovo prime minister Ramush Haradinaj said, referring to the US federal bureau of investigation.

Hinting at foreign involvement in the murder, Mr Haradinaj also said officials believe that “this crime, as well as certain criminal developments taking place in the north, are the result of illegal involvement . . . of other institutions beyond Kosovo”.

Serbia said its law enforcement agencies would conduct their own, parallel investigation into the killing of Mr Ivanovic (64).

Mr Vucic said he would visit Mitrovica and other Serb “enclaves” in Kosovo on Saturday and Sunday.

“He will go to northern and central Kosovo . . . to speak with our people about the unrest that they deal with, to be with them in the most difficult moment and to build the strength that we need together in these difficult times,” said Marko Djuric, the head of the Serb delegation in talks on Kosovo.

Opponents of Mr Vucic and his allies have recalled how the moderate Mr Ivanovic was often denounced by some Serbian officials and pro-government media.

A strong critic of many of Belgrade’s policies on Kosovo, Mr Ivanovic urged its Serb community to defend its interests by voting in elections and participating in the fledgling state’s institutions. In response, he was branded a “traitor” by more radical Serbs, he received frequent threats and his car was set on fire.

In 2016, Mr Ivanovic was convicted of committing war crimes against Kosovars, but the verdict was later quashed and a retrial ordered. He said the case was politically motivated.