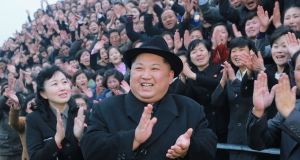 North and South Korea will march under a unified flag in the opening ceremony of the Pyeongchang Winter Olympics next month and field a joint women’s ice hockey team, while the North will send 230 cheerleaders and a 30-person taekwondo team to the games, officials from the unification ministry in Seoul said on Wednesday.

The news came in a communiqué after talks in the peace village of Panmunjom at the demilitarised zone separating the two Koreas, the third round of talks between the two, and marks a significant step forward in warmer ties between the two bitter rivals, divided since the end of the Korean War in 1953.

In a move filled with symbolism, the North’s delegation will enter the South using a land route through the joint industrial complex in the North Korean border city of Kaesong, which has been closed since 2016 as tensions began to escalate over the North’s nuclear programme.

The minister-level talks lasted 45 minutes and took place in the Peace House, a building on the South Korean side of the heavily fortified DMZ. The North will also send a delegation to the Paralympics and both sides also discussed staging a joint cultural event at the Mount Geumgang resort and using the Masikryong ski resort on North Korea’s east coast.

There are still thorny issues to be worked out, not least the fact that UN sanctions mean the South cannot subsidise the North’s trip to the games.

Despite an apparent thawing of relations, tensions remain. US president Donald Trump, whose aggressive tweets describing North Korean leader Kim Jong-un as “little Rocketman” have raised hackles in Pyongyang, was targeted by the Rodong Sinmun daily, one of the official organs of the North’s ruling Workers’ Party, which published an article slamming the US president as a “lunatic”.

“Trump astounded the international community by ridiculously distorting and manipulating the reality of our republic and ripping out all kinds of curses against us for a whopping 22 minutes in his 35-minute speech at the puppet National Assembly [in South Korea].

At a meeting in Vancouver of 20 foreign ministers to discuss North Korea, to which neither China nor Russia were invited, US secretary of state Rex Tillerson called for pressure to be piled on Pyongyang.

“As it was in the beginning, the great goal of the pressure campaign is to cut off the sources of funding that the DPRK [North Korea] uses to finance its illegal nuclear and ballistic missile programmes. Additionally, we must increase the cost of the regime’s behaviour to the point that North Korea comes to the table for credible negotiations,” Mr Tillerson said.

China, along with Russia the North’s only major ally, is caught in the middle in efforts to bring about a peaceful solution on the Korean peninsula, condemned the Vancouver talks as illegitimate and non-representative.

“While countries are committed to finding a proper solution for the peaceful settlement of the Korean peninsula nuclear issue, some parties hold such a meeting in the name of the so-called United Nations command during the cold war era. We do not know what the purpose of convening such a meeting is,” Chinese foreign ministry spokesman Lu Kang said at a regular news conference.