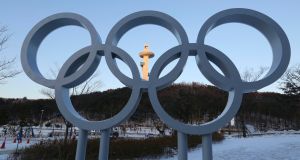 The Olympic rings at the press centre for the 2018 Pyeongchang winter Olympics in South Korea, which begin on February 9th. Photograph: Ahn Young-joon/AP

North Korea has switched the founding anniversary of the Korean People’s Army to February 8th, the eve of the Pyeongchang winter Olympics in South Korea, and may be planning a military parade to mark the event.

Pyongyang’s apparent decision to mark Army Building Day, formerly held on April 25th, with a parade will anger hawks in the South, as well as many younger South Koreans, who feel the North is trying to hijack the games.

The move shows how recent signs of rapprochement between the two bitter rivals on each side of the 38th Parallel dividing the Korean peninsula are still very early steps.

The decision that the North would take part in the games and that the two Koreas would march under a unified flag came during the first formal talks in nearly two years and followed on from a lengthy stand-off over the North’s nuclear tests and missile launches.

South Korean officials said they had spotted the movement of about 13,000 troops and some 200 pieces of equipment near an airfield in Pyongyang for what looks like a rehearsal for a military parade.

South Korea’s president Moon Jae-in said this week said the games were an opportunity to defuse tensions between the countries, divided since the Korean War ended in 1953 without a peace treaty.

During a visit by a North Korean delegation to plan various cultural events related to the games, conservative activists held a rally outside a train station in Seoul and burnt a North Korean flag, as well as a photo of Kim Jong-un. Demonstrators said Pyongyang was trying to use the winter games to give legitimacy to its claims as a nuclear power.

The protests were not welcomed in the North, where they were described as “unpardonable atrocities”.

“If these traitors and psychopaths defaming the dignified Korean nation are allowed to go scot-free, national reconciliation, unity and the building of a reunified powerful country will be so much delayed,” a North Korean government unification body said in remarks carried by the state news agency KCNA.

The decision to allow the North to play a role has cost Mr Moon popularity – his approval rating fell to a four-month low at 66 per cent, a poll showed, largely down to a decision to field a combined inter-Korean women’s ice hockey team.

A spokesman for the presidential residence, the Blue House, urged everyone to show respect to the North during the visit.

In all, 22 North Korean athletes will compete in five events, including figure skating, and the North will also send a team of cheerleaders, a taekwondo exhibition squad and a group of officials.