Women and children raped and starved in Libyan ‘hellholes’ - Unicef 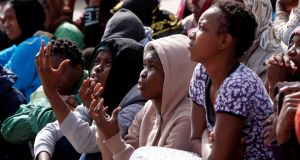 African migrants gesture as they sit in a detention camp in Tripoli, Libya in February. Photograph: Ismail Zitouny/Reuters

Women and children making the dangerous journey to Europe to flee poverty and conflicts in Africa are being beaten, raped and starved in “living hellholes” in Libya, the United Nations children’s agency (Unicef) said on Tuesday.

The Mediterranean Sea between Libya and Italy has become the main crossing point for asylum seekers and economic migrants seeking a better life in Europe, after a clampdown on sea crossings from Turkey.

There were a quarter of a million migrants in Libya as of last September, most of whom languish in unsanitary, disease-ridden detention centres which Unicef described in its report as “no more than forced labour camps ... and makeshift prisons”.

Armed groups have taken effective control of official detention centres for migrants amid the political chaos that now reigns in Libya and they also run their own centres, competing and co-operating with criminal gangs and smugglers, according to the United Nations.

“For the thousands of migrant women and children incarcerated, (the centres) were living hellholes where people were held for months,” the Unicef report said on Tuesday.

In interviews with more than 100 women and children, nearly half said they had been raped or abused several times during their journey, it said. Most of the children said they were beaten by adults along the way, with girls suffering more abuse than boys.

“Here (in the detention centre) they treat us like chickens. They beat us, they do not give us good water and good food,” said Jon, a 14-year-old boy who travelled alone from Nigeria to escape the militant group Boko Haram.

“So many people are dying here, dying from disease, freezing to death,” he was quoted as saying in the report.

Unicef said women and unaccompanied child migrants rely on people smugglers to get to Europe, often under a “pay as you go system”, leaving them vulnerable to exploitation, trafficking and violence, including prostitution and rape.

Smugglers typically demand thousands of dollars from migrants for a risky journey across the desert before cramming them onto ill-equipped boats for a perilous crossing of the Mediterranean.

“The route is mostly controlled by smugglers, traffickers and other people seeking to prey upon desperate children and women who are simply seeking refuge or a better life,” said Afshan Khan, head of Unicef’s refugee operations in Europe.

Having largely closed off sea crossings between Turkey and Greece last year, the European Union is searching for ways to stem the flow of migrants from Libya.

This month European leaders offered Libya money and other assistance to try to reduce the numbers departing across the Mediterranean. Aid groups criticised the move, saying such plans exposed migrants to further risks and abuses within Libya.

Last year, a record 181,000 migrants crossed between Libya and Italy, the UN’s migration agency reports. More than 4,500 people drowned, and at least 700 were children, Unicef said.