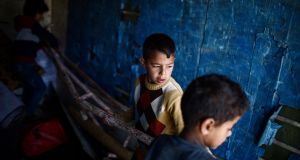 The Government has pledged another €3 million to support Syrian refugees who have fled the civil war to Jordan and Lebanon.

Minister of State for International Development Joe McHugh is travelling across the region this week to see first-hand the impact of the six-year conflict on families and their lives as refugees.

The trip takes place as the Department of Foreign Affairs revealed €70 million has been spent by the State on humanitarian aid in relation to the Syrian crisis since 2012.

“Ireland is committed to supporting those affected by the crisis in Syria, ” he said.

“The displacement of millions inside Syria and the flight of millions to neighbouring countries underlines the horrific violence and the appalling suffering caused by this conflict.

“This visit to Jordan and Lebanon is to witness first-hand the situation for Syrian refugees in these countries, and how this has impacted on host communities.”

During the trip Mr McHugh will visit Za’atari refugee camp near the Syrian border in Jordan.

About 80,000 people now live in the near-permanent settlement and almost half a million people have passed through it in the last five years.