Merkel warns of ‘walls of ignorance’ in Harvard speech 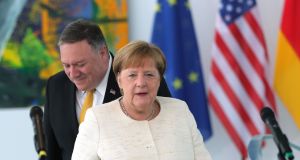 Chancellor Angela Merkel has insisted the US remains Germany’s most important partner outside of Europe – hours after warning Harvard graduates to avoid “walls in the heads, of ignorance and narrow-mindedness”.

Shortly before US president Donald Trump announced plans for a 5 per cent tariff on Mexican imports, Dr Merkel warned that protectionism and trade wars endangered global trade and world prosperity.

Without mentioning Mr Trump by name, the German leader used her US speech to warn that “nothing is a given” in today’s world: not freedom, democracy, peace nor prosperity.

Channelling Ronald Reagan’s 1987 speech at the Berlin Wall, she told graduates to “tear down walls of ignorance and narrow-mindedness” and to “not call lies truth and truth lies”.

In a commencement address with a distinctly valedictory note, the chancellor told of her life as a young academic in East Berlin living near the wall, which divided the German city from August 1961 to November 1989.

“I was no dissident, I didn’t run up against the wall but I didn’t deny it either because I didn’t want to lie to myself,” she said. “The Berlin Wall limited my opportunities, it literally stood in the way. But in all those years it didn’t manage one thing: to define my inner borders. My personality, fantasy and longings – none of that could be limited by bans and coercion.”

Hours later in Berlin, she held talks with US secretary of state Mike Pompeo, on his first visit to the German capital and three weeks after he cancelled their meeting at short notice.

“The world is uneasy,” she said alongside Mr Pompeo, acknowledging differences of opinion over Iran and fragile situations in Afghanistan, Syria and Libya.

Mr Pompeo was in Berlin to sound out German interest in backing US operations in Syria and the US hard line on Chinese tech giant Huawei.

At a press conference with his German counterpart, foreign minister Heiko Maas, Mr Pompeo said he had sought German support for US plans for a safe “buffer zone” in northern Syria along the border with Turkey. While Berlin has given positive signals so far, Mr Maas insisted it was a matter for parliament to decide later this year.

Turning to Iran, Mr Pompeo demanded greater efforts to stop the “Iranian torrent of destruction” but said Washington would not stop European efforts to shield companies dealing with Iran from American sanctions.

Four years after Washington pulled out of a deal that offered Tehran economic incentives in exchange for curbing its nuclear programme, EU member states are still parties to that deal. They are also working on a new system, known as INSTEX, to allow their companies trade in humanitarian and other non-sanctioned goods.

“If it’s aimed at facilitating the movement of goods that are authorised to move, it’s unproblematic,” said Mr Pompeo.

Mr Maas said Berlin shared Washington’s determination to prevent Tehran acquiring nuclear capability but, with a nod to disagreements over sanctions, said “it is no secret that we have different views on the way there”.

After their talks, Mr Pompeo repeated US concerns that allowing Huawei to build 5G networks in Germany could see sensitive data reach “the hands of the Chinese Communist Party” – and that risk could see the US curb intelligence-sharing. Another sanctions risk: companies participating in the Russian-led Nord Stream 2 pipeline to take Russian natural gas directly to Germany under the Baltic Sea.

Mr Pompeo refused to comment, however, on whether the US saw standoffs over Iran, Huawei or Nord Stream 2 as a cause for sanctions against German or any participating companies.

“We never discuss sanctions before we roll them out,” he said.