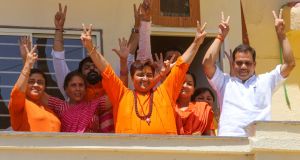 BJP candidate Pragya Singh Thakur with supporters at her residence in Bhopal on May 23th, the day of vote results in India’s general election. Photograph: Gagan Nayar/AFP/Getty Images

According to the independent and highly regarded Association of Democratic Reforms (ADR), 43.2 per cent – or 233 of the 539 MPs elected in the recently concluded elections – stand accused of various crimes.

ADR reported that this number was 17 per cent higher than after the 2014 general elections, when 185 MPs facing criminal charges entered parliament.

Indian electoral rules do not bar potential candidates facing criminal charges from contesting polls, but they oblige them to resign if they are convicted while in office.

The cases the MPs face include rape, murder, attempted murder and crimes against women, ADR said. Other charges include abetment to violence, inciting hate and disturbing communal harmony through public speeches.

The BJP headed this list with 39 per cent, or 116 of its MPs, facing criminal charges – including six for murder – followed by 29 of 54 MPs from the principal opposition Congress Party, one of whom is being prosecuted for homicide.

The remaining 88 MPs facing charges are from smaller regional parties across the country.

Among the BJP MPs facing charges is Pragya Singh Thakur (49) from Bhopal, who is the principal accused in the 2008 Malegaon bombing in western India in which 10 people, including children, were killed and 82 others injured.

She is also a leading member of the ultra-right Hindu Rashtriya Swayamsevak Sangh (RSS), or National Volunteer Corps, that provides “spiritual guidance” to the BJP.

Founded in 1925, the quasi-paramilitary volunteer Hindu organisation that was modelled on Italy’s pre-second World War Fascist party has been proscribed twice since India’s independence in 1947 for its extremist beliefs.

The RSS’s remit is to defend Hinduism by keeping it “pure” from outside influences such as Islam and Christianity, a goal it has pursued more avidly since the BJP assumed political power in 2014.

Ms Thakur, for her part, attracted criticism from the opposition and sections of the media for calling Mahatma Gandhi’s assassin a “patriot”. She said Nathuram Godse, who also subscribed to RSS beliefs, was a staunch nationalist.

“Under what circumstances he [Godse] made the decision [to kill the Mahatma] no one knows” Ms Thakur said, embarrassing Mr Modi, who had approved her candidature as MP.

The French political scientist Christophe Jaffrelot, who specialises in south Asia, said Ms Thakur had become the “symbol” of the 2019 election in which fringe elements espousing Hindutva or Hindu hegemony had become part of mainstream BJP politics.

Ms Thakur eventually won her Bhopal seat by a margin of more than 364,000 votes, roundly defeating a stalwart Congress leader.

In India’s notoriously slow judicial system it remains highly unlikely that Mr Kuriakose could be convicted on any of those charges during his five-year parliamentary term.