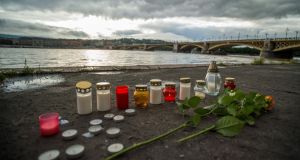 Flowers and candles are placed on the riverbank to pay tribute to the victims of the capsized boat near Margaret Bridge in Budapest, Hungary. Photograph: Zoltan Balogh/EPA/Hungary OUT

Hungarian prime minister Viktor Orban said on Friday he had asked for a thorough investigation into a boat accident on the Danube River in central Budapest that killed at least seven South Korean tourists this week.

“One is shaken by this ... an accident happened where passengers had almost no chance for survival,” Mr Orban told state radio, offering condolences to relatives of the victims.

“I have asked the authorities to carry out a strict and thorough investigation,” he said.

Hungarian police said late on Thursday they had taken into custody the captain of a cruise ship involved in the accident.

The boat was cruising when it collided with a larger luxury passenger boat during a rainstorm on Wednesday evening, causing it to capsize and sink with 33 South Korean tourists and tour guides and two Hungarian crew aboard.

A crane ship was docked near the wreck in preparation for recovery operations. Police have said the rescue efforts were hampered by high water levels, strong currents and bad visibility. –Reuters

Harry and Meghan say past must be acknowledged even if it is ‘uncomfortable’ 23:03
Right-wing French cabinet to hold first meeting 21:26
At least 40 dead as torrential rains hit southern Japan 19:21
Spanish officials seek to reassure in spite of new Covid-19 restrictions 19:08
Ghana offering African Americans the chance to move to Africa 18:48