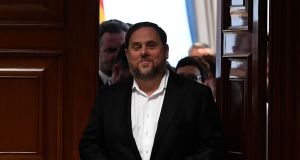 Spain has issued a formal complaint to the United Nations about a human rights delegation that published a report calling for the immediate release of Catalan prisoners.

The Spanish government said on Friday that it had called for the recusal of two members of the five-person UN Working Group on Arbitrary Detention, alleging that both had links to the Catalan independence movement and were therefore biased.

On Wednesday, the UN team published its findings, deeming the preventive custody of three leading pro-independence figures unwarranted on the grounds that it contravened articles of the Universal Declaration of Human Rights.

Former Catalan vice-president Oriol Junqueras and pro-independence rank-and-file leaders Jordi Cuixart and Jordi Sànchez have been in prison since the autumn of 2017. They and six others who are also in jail are currently on trial in the supreme court for their alleged role in Catalonia’s failed bid for independence, which included holding a referendum which had been outlawed by the judiciary. They face charges that include rebellion, while three others who are also on trial face lesser charges.

The working group report recommended that Spain immediately release Junqueras, Cuixart and Sànchez “and grant them the right to receive compensation and other types of damages, according to international law”.

It also asserted that the legal case against the three men sought to “put pressure on them because of their political opinions regarding the independence of Catalonia and to prevent them from continuing with that aim in the political arena”.

The report is not binding, although it endorsed claims by the Catalan government and the independence movement that those being held are political prisoners.

The Spanish government rejected many of the UN group’s conclusions on the day they were published, insisting that those facing trial were doing so for legal rather than political reasons. It also denied the working group’s claim that the independence referendum of 2017 had been legal.

In addition, the government criticised the report’s timing, with the supreme court trial due to end on June 12th.

On Friday, Spain went further, formally requesting the removal of two of the working group’s members, José Guevara and Seong-Phil Hong. The Spanish government says that they have previously worked alongside Ben Emmerson, a British lawyer who has represented Junqueras, Cuixart and Sànchez.

Madrid has also complained that the report was leaked to the prisoners’ legal team at the same time the Spanish government received it.

The Catalan government said on Friday it had written to Spanish prime minister Pedro Sánchez, calling on him to implement the measures suggested in the UN report.

The controversy over the document has flared up in the same week that the independence movement suffered a legal setback. On Tuesday, the European Court of Human Rights rejected an appeal by 76 Catalan politicians against a constitutional court suspension of a 2017 Catalan parliamentary session.

The session had been scheduled to assess the results of the independence referendum.