Saybie weighed 8.6 ounces and had been in neonatal intensive care since December

"Saybie", who weighed just 8.6 ounces at birth - making her the smallest known baby to survive, has left hospital in San Diego five months after being delivered by caesarean section. The previous small baby record was 8.9 ounces. Video: Reuters 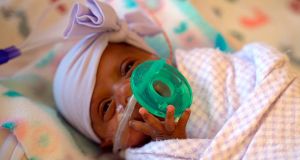 An infant girl who weighed about the same as a large apple when she was born five months ago and is believed to be the world’s tiniest baby to survive has gone home from a San Diego hospital in the US.

The baby, known as Saybie, weighed 8.6 ounces (245 grams) when she was born in December at Sharp Mary Birch Hospital for Women and Newborns, the hospital said in a statement announcing her birth and discharge on Wednesday.

Saybie weighed a little more than a large Golden Delicious apple, which usually is about 7.5 ounces. She is believed to have broken the record for the world’s tiniest baby, according to the Tiniest Babies Registry. The record was previously held by a baby who weighed 8.9 ounces when she was born in Germany in 2015, according to the registry maintained by the University of Iowa.

In December, Saybie’s mother, who wished to remain anonymous, gave birth through emergency cesarean section at 23 weeks, three days gestation in the womb, about 17 weeks earlier than the typical pregnancy, the hospital said.

“Doctors said the preterm birth was necessary after they found that the baby was not gaining weight and her mother’s life was at immediate risk,” the hospital said.

Saybie, considered a micro preemie, was treated in the hospital’s neonatal intensive care unit she was discharged to go home in May, when she weighed 5.6 pounds, according to the hospital.

“Saybie experienced virtually none of the medical challenges typically associated with micro preemies, which can include brain bleeds, and lung and heart issues,” the hospital said. – Reuters

Russians grant Putin right to extend his rule until 2036 in landslide vote 07:32
Trump says Covid-19 will disappear after US reports record increase 07:02
Leicester lockdown could be just the start if tracing system not improved – Labour 22:30
Trumps to travel to South Dakota for July 4th despite rise in US coronavirus cases 20:33
World takes stock of Covid-19 drug after US snaps up supplies 20:24