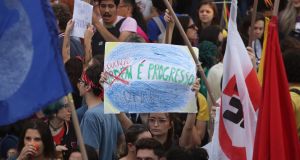 Protesters on the streets of São Paulo march against the slashing of education funding in Brazil. Photograph: Fabio Vieira/FotoRua/NurPhoto via Getty Images

Brazil’s education ministry has set off a political storm by calling for the public to denounce parents, students and teachers who “stimulate” protests against budget cuts during school hours.

The ministry published its call, which contained a link to where people could inform on its website, just as a second round of demonstrations against the slashing of education funding took place in more than 100 cities across the country on Thursday.

The note, which claimed “teachers, suppliers, staff, students, parents and responsibles are not authorised to disclose and stimulate protests during school hours”, drew an immediate storm of criticism down on controversial education minister Abraham Weintraub.

Amid accusations of incipient totalitarianism, opposition politicians are mobilising to charge the minister with abuse of authority, while in comments to the local media one of the country’s leading federal prosecutors said his ministry’s note could violate the constitution and the country’s statute of the child and adolescent.

Mr Weintraub started the current round of student unrest by saying he was cutting funding to three universities because of what he said was their promotion of “messing about” rather than focusing on academic standards.

After his initial plan was met with outrage, he dropped the idea of punishing individual institutions to unveil instead a funding freeze across the entire public university sector.

An acolyte of the former astrologer turned conspiracy theorist who is the guru for several ministers of far-right president Jair Bolsonaro, Mr Weintraub has vowed to combat what he sees as “cultural Marxism” in the country’s education sector.

Thursday’s note also warned that educational institutions are banned by law from promoting actions organised by political parties. The Bolsonaro government has sought to portray the recent student protests as being organised by its left-wing opponents.

The minister has already been charged by federal prosecutors for moral damages after they accused him of “hateful discrimination directed at representatives of the student movement” since he took over the ministry in April.

The charge includes as evidence a conversation the minister had with politicians in the northeastern state of Rio Grande do Norte who questioned him about the lack of funding for basic cleaning services in local universities. Mr Weintraub responded that student union bodies should be called in to clean the institutions instead.

Prosecutors are seeking a fine of five million reais (€1.14 million).

He is also facing questions about allegations his ministry has blocked funds for the rebuilding of the national museum, which burned down in a fire in 2017.

This week’s protests and the administration’s combative reaction to them highlight the increasing political polarisation in Brazil.

The education cuts come against a background of a worsening economy with confirmation this week that during the first three months of the year it suffered its first quarterly contraction since 2016.