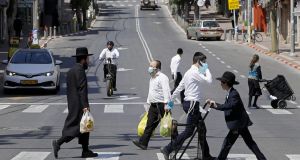 Ultra-Orthodox Jews, some wearing masks, cross a street with their shopping in the religious Israeli city of Bnei Brak, near Tel Aviv, on Friday. Photograph: Jack Guez/AFP via Getty Images

One thousand police officers, backed by hundreds of soldiers, descended on the ultra-Orthodox city of Bnei Brak on Friday as Israel stepped up efforts to contain the coronavirus outbreak.

Bnei Brak, which adjoins Tel Aviv, was identified as one of the main clusters of the epidemic, with infection and mortality rates way above the national average.

The move came after the cabinet approved emergency measures to put the city – one of the poorest and most densely populated in Israel –under quarantine.

Dozens of roadblocks were set up on major arteries in the city as drones and other technological means were used to prevent non-residents from entering, in an unprecedented operation that was being co-ordinated by a senior army officer.

The drastic measures were taken after unsuccessful efforts to make the city’s residents comply with the nationwide shelter-at-home ordinances that had been introduced by the government.

Bnei Brak residents were told they would not be allowed to leave, except in exceptional circumstances, and that food and medical supplies would be provided throughout the Jewish Sabbath, which began at sundown on Friday.

The government also planned to evacuate many of Bnei Brak’s elderly to designated hotels that have been converted into temporary hospitals. However, the city’s residents were reluctant to move ahead of the week-long Passover holiday, which begins next week.

The deputy mayor of Bnei Brak criticised the lockdown, calling the decision to close off his city “a death trap for the city’s elderly”. Gedalyahu Ben Shimon said the extreme measures had led “many residents to flood a limited number of supermarkets, thus increasing the danger of infection”.

Many other ultra-Orthodox centres in Israel, including neighbourhoods in Jerusalem, were also showing unusually high levels of the virus.

The insular community, which shuns television, radio and internet, was slow to grasp the devastating impact of coronavirus, and many synagogues and religious seminaries remained open in defiance of government restrictions.

Israel’s ultra-Orthodox health minister, Yakov Litzman, who has been criticised for his handling of the crisis, tested positive for the virus this week, prompting prime minister Binyamin Netanyahu and other senior officials who held meetings with Mr Litzman to enter into self-isolation on Thursday.

Israel had more than 7,000 confirmed coronavirus cases and almost 40 fatalities by Friday. Everyone is restricted to a 100m radius of their home and must wear a face mask outside.