Coronavirus will be cinema’s biggest villain for some time yet 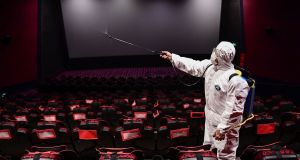 A cinema in Shenyang in China is sprayed with disinfectant as it prepared to reopen in March: all cinemas in China are now closed again. Photograph: STR/AFP via Getty Images.

On the sides of the ghost buses now hurtling through Dublin, you can still see posters for A Quiet Place Part II, one of dozens of films to have their spring releases kyboshed by coronavirus. There’s almost nobody on the bus, almost nobody on the street, and absolutely nobody in the cinemas, but in the absence of new advertisements, the stricken face of star Emily Blunt looms on.

Beside it, sits the name of co-star Cillian Murphy, who you may know from such films as 28 Days Later, a cheery tale about the breakdown of society after the spread of a deadly virus.

The original A Quiet Place, an unexpected hit in 2018, presented a different kind of apocalypse, one in which making any sound at all got you killed by extraterrestrials. This notoriously saw cinema audiences maintain a tense silence throughout. Chatter ceased, rustle-prone sweet pouches remained full, and the occasional cough was followed by nervous ripples of laughter.

Now the cinemas are silent for another reason, and some films are not just seeing their releases deferred, but cancelled, the question is this: what happens when all government-mandated forms of social distancing are history?

For Tim Richards, founder and chief executive of the cinema chain Vue, the answer is an ecstatic return to cinemagoing.

“Families, couples, individuals are being tied up at home for weeks or months now,” he told the Observer. “When it is over, there will be a demand to get out like we have never seen in history. There is no scenario after lockdown where people will say ‘I’m not going out, I’m staying in to watch Netflix’.”

In broad terms, I would subscribe to this pent-up demand theory. Although it has become a fashionable exercise lately to tease through how life might be different (usually better) “when it is over”, there’s an equally optimistic impulse pushing people to mentally draw up lists of parties to stage, places to go, things to buy and activities never to be taken for granted again.

But it probably won’t happen overnight. We’re hardly going to flock en masse to our nearest cinema the minute it is allowed to reopen, then proceed to cough into each other’s popcorn buckets as, weary of Netflix, we rush to consume the finest films that streaming services don’t have to offer.

If there is a post-Covid-19 bounce, it will more likely arrive some time after months of industry struggle, caution and lingering restrictions. There is already a precedent for how it might unfold. In China, about 500 out of its 70,000 cinemas reopened in March, showing old releases, only to shut down again days later as authorities acted to suppress a second wave of virus transmission. None of the major exhibition chains had joined in the reopening, and there were no new movies to show anyway.

Here, a point may feasibly come where public health logic suggests an initial period of partial-opening, in which cinemas void the majority of the seats and customers sit at least 2m apart, similar to the conditions that prevailed during their brief bids to stay open after schools closed in mid-March. Friday night at the multiplex would resemble the sparseness of an arthouse cinema on a Tuesday afternoon.

But there would be little business logic for anyone involved. No Hollywood distributor wants to release a big-budget title into so uncertain and tentative a market, one in which the audience needs to be feeling adventurous just to enter an enclosed space with strangers.

A Quiet Place Part II, due to open on March 20th, was one of the early postponements, with distributor Paramount Pictures rescheduling its release for September, though not before the promotion of the film was well under way.

The same was true for No Time to Die, the Bond instalment that was the first blockbuster to be pulled, in what now seems like a highly prescient March 4th announcement by MGM, Universal and producers Michael G Wilson and Barbara Broccoli. In an alternative pandemic-free universe, Ireland’s cinemas would have been packed last weekend with Bond fans (or Daniel Craig fans), as 007 returned to screens. Now, fingers crossed, Bond will be seen behaving badly in November.

Amid the uprooting of months of studio “tent-poles”, some releases, such as Fast and Furious 9, Minions: The Rise of Gru, and Ghostbusters: Afterlife, have been pushed out to 2021, by which point the bottleneck may ease, if only because production stoppages will prevent the next batch of films from timely completion.

But while the likes of Bond, Top Gun: Maverick, and Wonder Woman 1984 are still destined to have their day, that’s not true for smaller films. And it’s not just the smallest of the small either: anything that isn’t a nailed-down winner is at risk of having its theatrical release scrubbed from the calendar. On Friday, Disney announced that Kenneth Branagh’s Artemis Fowl, adapted from the fantasy novel by Eoin Colfer, would now bypass cinemas and launch on Disney+. It won’t be the last film to take this route.

Some exhibitors, notably debt-burdened Cineworld, have already sounded the financial alarm bells. Not every cinema will have the cash cushions required to survive such a disastrous year: some may be saying “that’s all folks” before they even get the chance to screen the flurry of pandemic films now in hasty, inevitable development.

1 In six months we will be in the grip of a 1980s-style recession
2 Angela Merkel sweeps in to save the euro zone
3 Chartered Land gets green light for Dublin’s tallest tower on Parkgate Street
4 Aer Lingus wants quarantine period axed to resume flights in July
5 Google facing $5bn lawsuit for tracking in ‘private’ mode
6 Unemployment rate remains at near record 26.1% in May
7 The fight over how to pay for the global economic recovery has begun
8 More than 2m people use website that shows lockdown distance limits
9 Dispute over Perrigo’s €1.64bn tax assessment comes before High Court
10 Parts of Brown Thomas and Arnotts to reopen next week
Real news has value SUBSCRIBE

Data protection experts publish principles for contact-tracing app 13:34
Chartered Land gets green light for Dublin’s tallest tower on Parkgate Street 13:34
Dispute over Perrigo’s €1.64bn tax assessment comes before High Court 12:43
The fight over how to pay for the global economic recovery has begun 12:23
Cider sales fizzle out even as exports jump on Brexit stockpiling 12:08
Search executive
jobs on irishtimes.com