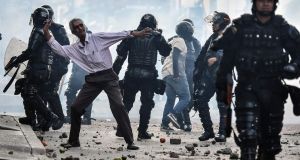 A demonstrator throws stones in recent days during a protest against a campaign rally for Rodrigo Londono Echeverri, known as “Timochenko”, the presidential candidate for the Common Alternative Revolutionary Force (Farc) political party. Echeverri was to hold a meeting during a visit to Yumbo in recent days but was forced to leave because of the violence. Photograph: Luis Robayo/AFP/Getty Images

It is now more than a year since the Colombian government ratified a peace deal with Farc rebels that had been rejected by a narrow majority in a referendum.

Today, progress is stalling as the country faces into national elections.

Many citizens still struggle to tolerate the normalisation of former guerilla fighters.

Dozens of Farc members have been assassinated and the group are threatening to pull out of the political process. To complicate matters further, cocaine production is booming.

To find out more about the problems facing Colombia, Dave McKechnie spoke to the country’s post-conflict minister Rafael Pardo on his visit to Dublin this week, and also to Tom Hennigan, who reports on Colombia for The Irish Times.

World View is a weekly foreign affairs podcast from The Irish Times. Subscribe on Android, on Apple Podcasts, on Stitcher or on Soundcloud