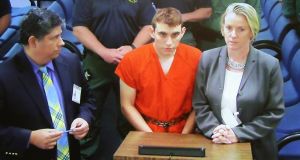 US authorities have begun piecing together a picture of Nikolas Cruz, the 19-year-old man who was charged with 17 counts of premeditated murder in Florida yesterday.

Mr Cruz had been a student at the Marjory Stoneman Douglas High School in Parkland until last year, when he was expelled for disciplinary issues. His former classmates described him as a loner, who had significant behavioural issues. Teachers had been warned not to allow the former student to enter the school with a backpack while he was still a student at the school.

He and his brother Zachary had been adopted by Lynda and Roger Cruz when they moved to Florida from Long Island, New York. Roger died in 2004 and the boys’ adoptive mother died last November. The suspect and his younger brother had been living with a friend since then.

In an interview with the Washington Post, Lynda Cruz’s sister-in-law Barbara Kumbatovich said Lynda had “put a lot of time and effort into those boys, trying to give them a good life and upbringing”. But she said Nikolas had been suffering from emotional problems.

As the suspect was charged in court, it emerged that the FBI had been warned Mr Cruz could pose a threat. A blogger had contacted police last September when a man with the name Nikolas Cruz posted a video on YouTube with the comment “I’m going to be a professional school shooter.”

After the blogger, Ben Bennight (36), from Mississippi, contacted the FBI, the bureau interviewed him the following day in person, but he did not hear again from the intelligence agency until this Wednesday, after the attack.

The FBI’s special agent in charge of the Miami division, Robert Lasky, confirmed that the FBI had been informed of the YouTube posting, but said it was unable to identify the person who had made the comment.

The investigation is also turning to how Mr Cruz acquired the weapons he used in the attack. Police have reportedly seized an AR 15-style weapon – which retails at between $800 and $1,400 – after the shooting. There were unconfirmed reports that Mr Cruz purchased the weapon legally in Florida in February last year.