Jacob Zuma’s future in balance as ANC locked in talks 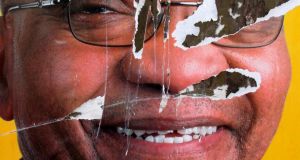 The ANC’s 88-member national executive committee (NEC) gathered at the St George Hotel near Pretoria on Monday to hear about exit negotiations between Mr Zuma and the ruling party’s new president, Cyril Ramaphosa, and to decide on how to proceed.

The former liberation movement is expected to ask Mr Zuma, who has a range of corruption charges pending against him and is deeply unpopular with large sections of the electorate, to resign from office immediately.

Mr Zuma stood down as ANC president last December but his term as South Africa’s president does not end until 2019.

It had been hoped that the talks between Mr Ramaphosa and Mr Zuma would yield the latter’s voluntary resignation, as this would pave the way for a smooth transition of power between the new ANC leadership and government.

But over the weekend local media reported that the talks between Mr Zuma and Mr Ramaphosa had broken down over Mr Zuma’s demands.

On Sunday, Mr Ramaphosa promised South Africans that the matter would be brought to a close by the NEC on Monday, but he declined to reveal the outcome of his negotiations with Mr Zuma.

By 10pm local time, there had been no indication from the St George Hotel as to the NEC’s decision on whether it would recall Mr Zuma or not.

If the NEC recalls Mr Zuma from office but he refuses to stand down, South Africa’s president is expected to face a vote of no confidence in parliament before the end of the month.

Alternatively, Mr Zuma could be impeached if he is suspected of violating the South African constitution or breaking the law.

As the NEC meeting got under way, opposition parties held a joint press conference in which they outlined their plans to get rid of Mr Zuma if the ANC did not act decisively.

They called on the speaker of parliament, Baleka Mbete, to debate the Economic Freedom Fighters’ (EFF) motion of no confidence in Mr Zuma this week rather than on February 22nd, when it is scheduled.

EFF leader Julius Malema said Ms Mbete had until Tuesday morning to respond to their request or they would go to court to force the matter.

The parties also said they wanted parliament to be dissolved and fresh elections held before a new president of the country is elected.

The leader of the main opposition Democratic Alliance party, Mmusi Maimane, maintained they were calling for early elections because the factionalism in the ANC was holding the country to ransom.

The opposition parties also called on South Africans to march on parliament on the day the motion takes place to ensure MPs were aware of the public’s position on the matter. “This is about the will of the people and not the will of a faction of the ANC. It is important that the people’s voice be heard,” Mr Maimane said.