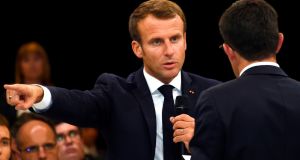 France’s president Emmanuel Macron: believes the far right must not be allowed to continue to monopolise the immigration issue. Photograph: Eric Cabanis/AFP via Getty Images

Immigration is the most explosive issue in French politics, yet president Emmanuel Macron decided to make it a key theme this autumn. The National Assembly and Senate are debating the subject this week.

Macron believes the far right must not be allowed to continue to monopolise the issue. Since the gilets jaunes revolt, he has devoted more attention to the concerns of the disadvantaged.

Macron explained his rationale before parliamentarians from La République en Marche on September 16th. “Do we want to be a bourgeois party?” he asked. “The bourgeois don’t have any problem with [immigration]. They don’t encounter it. The lower classes live with it.”

Macron wants to win over more right-wing voters, and halt the rise of the extreme right. “You have only one opponent on the ground. It’s the Front National, ” he told party faithful, calling Marine Le Pen’s Rassemblement National by its former name.

“France is becoming the leading European country for asylum seekers,” Macron said on August 27th. Last year, 122,743 people requested asylum in France, a 22 per cent increase, while applications have declined by 13 per cent on average in Europe. Macron’s administration believes the rise in asylum applications is fuel for the RN.

Macron pleads for a new, Europe-wide approach that would limit asylum and refugee status to those whose lives are in danger. He wants Europe to better protect its borders, and to distribute asylum seekers more fairly throughout the union.

In a speech to the assembly of the Council of Europe in Strasbourg on October 1st, Macron argued that the right to asylum is a fundamental element of western democracy, but that it will cease to exist if abuses continue.

Macron has promised to expel failed asylum applicants more rapidly. And he is trying to correct misconceptions about immigration.

“We mustn’t let people think that we’re overwhelmed by the phenomenon, or that France was ever a country without immigrants,” he told Europe 1 radio. Immigration policy to date has been “neither humane nor efficient”, he said.

“If we are going to welcome people with dignity, we must not be such an attractive country,” Macron added. The government is reconsidering family reunification, which brings 90,000 immigrants to France each year. There is talk of lowering the daily allowance of €6.80 given to asylum seekers, and limiting the state medical aid programme for the undocumented, known as the AME.

The AME was established by the socialist Jospin government in 2000 and benefits 300,000 people. All conservative candidates in the last presidential election promised to abolish it.

The far right see the debate in stark terms, conflating immigration with a Muslim “invasion”

Advocates of the AME say it prevents the spread of contagious disease, and that its abolition would have no effect on the flow of migrants. Health minister Agnès Buzyn has said maintaining the AME for illegal aliens is “an absolute necessity”.

Pierre Henry, the head of France Terre d’Asile, which helps migrants, says the debate on the AME merely “feeds fantasies about alleged fraud” and that its abolition “would save peanuts”. One possibility would be to exclude certain illnesses such as cancer and hepatitis C.

The far right see the debate in stark terms, conflating immigration with a Muslim “invasion” which they claim is shaking the fundaments of French civilisation. A video clip promoting a far-right convention in Paris on September 28th alternated images of Muslims praying in the street with Notre Dame in flames, and the slogan “France is no longer herself”. There is no evidence that Muslims had anything to do with the fire at the cathedral last April.

The extreme right has espoused the far right-wing writer Renaud Camus’s theory that Europe’s indigenous population is undergoing a “great replacement” by Arab and African migrants.

“The first great challenge, and the most vital, is the great replacement,” Maréchal said. “This demographic countdown makes us envisage the possibility of becoming a minority on the land of our ancestors, with as a corollary the grand ensavagement of a multicultural society.”

Maréchal noted that even Macron, who had defended German chancellor Angela Merkel’s open door to migrants, “feels obliged today to send signals that he understands the suffering of the French on this subject”. She advocated incentives to increase French fertility rates “because I do not believe that peoples are interchangeable”.

Speaking at the same convention, Eric Zemmour, a far right-wing commentator for Le Figaro newspaper, called on the French to fight against “an army of occupation” whose “uniform” is the Arab robe, the djellaba.

The Paris tribunal placed Zemmour under investigation on October 1st for “provoking discrimination, hatred or violence”. Zemmour was already convicted for hate speech in 2011 and 2018. His colleagues at Le Figaro demanded that their editors re-examine the terms of Zemmour’s employment.

Zemmour’s half-hour speech was broadcast live on French television. “All our problems are aggravated by immigration and aggravated by Islam,” he said. “Will young French people accept to live as a minority on the land of their ancestors? If so, they deserve to be colonised. Otherwise, they must fight for their liberation.”

Macron wants a calm, realistic and pragmatic debate over immigration. But, like the former president Nicolas Sarkozy in the late 2000s, his tougher new policies run the risk of alienating moderate voters while failing to satisfy the followers of the extreme right.