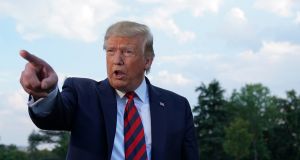 US president Donald Trump’s efforts to keep his tax returns private received a setback on Monday when a New York court blocked his attempts to stop the district attorney from accessing eight years of his tax records.

In a 75-page ruling, US district judge Victor Marrero rejected arguments from the Trump legal team that their client could invoke executive privilege as president of the United States.

Instead, he ruled that district attorney Cyrus Vance should gain access to Mr Trump’s personal and tax records stretching back to 2011. Mr Vance is investigating the payment of hush money to adult film star Stormy Daniels, and whether Mr Trump’s repayment of funds to his attorney Michael Cohen broke any business laws.

Mr Trump’s legal team immediately filed an appeal in court. In a legal win, they were granted a stay from the US court of appeals, which removed the obligation to hand over the records on Monday.

Mr Trump, who is the first president since Gerald Ford not to disclose his tax returns, has been fighting attempts by investigators to subpoena his business affairs. The House ways and means committee in Congress – which is now working under the umbrella of the impeachment inquiry – is also seeking access to Mr Trump’s financial affairs.

The Radical Left Democrats have failed on all fronts, so now they are pushing local New York City and State Democrat prosecutors to go get President Trump. A thing like this has never happened to any President before. Not even close!

The development came as House committees pressed on with their impeachment probe, which was established in response to the emergence of a phone call between Mr Trump and Ukrainian president Volodymyr Zelenskiy on July 25th, in which Mr Trump asked Mr Zelenskiy to investigate his Democratic rival Joe Biden.

On Monday, committee chairs subpoenaed documents from the department of defence and the office of management and budget (OMB) about the withholding of military aide for Ukraine.

“The Committees are investigating the extent to which President Trump jeopardized national security by pressing Ukraine to interfere with our 2020 election and by withholding military assistance provided by Congress to help Ukraine counter Russian aggression, as well as any efforts to cover up these matters,” the lawmakers said in a letter to defence secretary Mark Esper and acting head of the OMB, Russ Vought.

It comes as a subpoenaed state department official declined to appear at a hearing on Monday.

The United States’s ambassador to the European Union, Gordon Sondland, is expected to be questioned on Tuesday behind closed doors by the committees on Capitol Hill.

Mr Sondland has emerged as an important link between Washington and the Ukrainian government, despite holding the job of the top US diplomat in Brussels.

Text messages released by former Ukraine special envoy Kurt Volker last Friday during congressional testimony, reveal that Mr Sondland was part of an effort to encourage the Ukrainian government to investigate the 2016 election.

According to one text, Mr Sondland, a hotel magnate before his appointment by Mr Trump, asked his colleague in Ukraine to stop texting, after he suggested that Mr Trump was withholding security assistance “for help with a political campaign”.

“The President has been crystal clear: no quid pro quo’s of any kind,” Mr Sondland wrote. “The President is trying to evaluate whether Ukraine is truly going to adopt the transparency and reforms that President Zelensky promised during his campaign.”