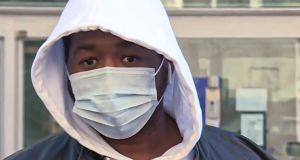 Michel Zecler talks to media outside the IGPN (France’s National Police General Inspectorate) as he arrives to press charges after he was repeatedly beaten by police. Photograph via AFP/Getty

President Emmanuel Macron on Monday summoned prime minister Jean Castex, interior minister Gérald Darmanin and justice minister Eric Dupond-Moretti to the Élysée Palace in the hope of defusing a deepening crisis over police brutality and a draft law which critics say threatens freedom of the press.

Leaders of the political groups, which comprise Mr Macron’s parliamentary majority also attended the meeting, where Mr Macron was reportedly irritated, even angry, and addressed participants in an icy, authoritarian tone.

The publication of a video of three policemen beating an unarmed black music producer in his recording studio, published by the Loopsider website last Thursday, shocked the country. The video had been viewed more than 14 million times by Monday afternoon.

In a post on his Facebook page, Mr Macron said images of the beating of Michel Zecler “shame us”. Mr Zecler is co-director of Black Gold Studios, which records hip-hop and rap music.

The Élysée telephoned Mr Zecler at the weekend to express Mr Macron’s “shame” on seeing the images.

Mr Macron said he is seeking ways “to reaffirm the bond of trust” between the French and police.

But if he is too critical of police, he risks angering overstretched security forces working under high terrorism alert, and the right-wing voters who have warmed to his policies.

Xavier Bertrand, a presidential hopeful from the conservative party Les Républicains, called Mr Macron a “chameleon president” who changes policies according to circumstances.

Several celebrities protested at Mr Zecler’s beating. The rap star known as Stomy Bugsy said Mr Zecler was attacked “because he is black”.

Mr Zecler was coming out of his studio in the affluent 17th district of Paris on November 21st when he saw a police car parked outside and turned to go back inside. Mr Zecler was not wearing a face mask, as required by Covid-19 regulations. Police said they smelled cannabis, and found 0.5g of cannabis in Mr Zecler’s bag.

The three policemen followed Mr Zecler into his studio and began pummelling him with their fists. The assault was filmed by a security camera. A photograph of Mr Zecler’s swollen, bloodstained face went viral.

Police detained Mr Zecler for 48 hours on suspicion of “violence against a person in a position of public authority” before releasing him without charge.

The video showed that contrary to the police report, Mr Zecler did not resist police. The three officers, aged 23, 31 and 44, were formally placed under investigation for violence, racist language, falsifying police records and invading and damaging private property. A fourth officer is under investigation for throwing a tear gas grenade into the studio.

The Paris prosecutor’s office on Monday placed two of the policemen in preventive detention, citing the gravity of their alleged offences, the disturbance of public order and the risk that the policemen would concert their stories or exert pressure on each other.

The policemen claimed they felt trapped in Mr Zecler’s studio and that they acted out of fear. Under questioning over the weekend, they nonetheless admitted having acted “disproportionately”.

After the meeting at the Élysée, Christophe Castaner, the head of La République en Marche in the National Assembly and Mr Darmanin’s predecessor at the interior ministry, held a press conference in which he promised Mr Macron’s majority will “rewrite” article 24 of the general security law because of the “incomprehension” it has created. It was a stunning disavowal of Mr Darmanin, who has continued to defend the provision.

Article 24 would make publishing a photograph or video of security forces with “malicious intent” punishable by up to a year’s imprisonment and a €45,000 fine.

The passage of the law in the National Assembly last Tuesday, combined with the violent police break-up of a makeshift migrant camp on the place de la République, and especially the video of Mr Zecler’s beating, prompted hundreds of thousands of people to participate in protest marches across France on Saturday.

Clashes at some of the marches, particularly in Paris, were reminiscent of the gilets jaunes crisis in 2018-2019. Mr Macron would prefer to forget that episode.

Anarchist groups that grafted themselves on to the marches set fire to vehicles, a brasserie and a branch of the Banque de France. Close to 100 policemen and gendarmes were injured. Most alarming for Mr Macron, many of the protesters were the sort of middle-class people who brought him to power.

Journalists’ unions participated in Saturday’s marches. Police have in recent years stepped up harassment and violence against journalists who cover social movements such as the gilets jaunes and protests against pension reform.