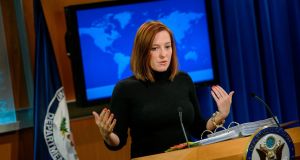 US president-elect Joe Biden has given top economics and communications positions to former aides to Barack Obama and Hillary Clinton, appointing women to a number of senior roles.

The announcements came as it emerged that Neera Tanden, a former senior aide to Mrs Clinton, was set to be appointed White House budget director, according to people familiar with the matter.

Mr Biden is also poised to name Cecilia Rouse, a Princeton University labour economist, to be chair of the White House council of economic advisers. Prof Rouse would be the first African-American to lead the council.

The council will also include Jared Bernstein, Mr Biden’s former chief economist when he was vice-president, and Heather Boushey, an economist whose research is centred on combating inequality.

The economic appointments are likely to be announced this week with the selection of Janet Yellen, the former Fed chair, as treasury secretary.

Ms Yellen is expected to be supported by Wally Adeyemo, president of the Obama foundation and a former international economic official during his administration, as deputy treasury secretary. The economic appointments were first reported by the Wall Street Journal.

Additionally, Brian Deese, a former Obama administration official who works on sustainable investing at BlackRock, the fund manager, is the frontrunner to be director of the White House National Economic Council, according to people familiar with the matter.

Mr Biden’s appointments emerged at the end of the Thanksgiving holiday, as the president-elect continued to fill out his team with a more diverse cast of senior officials than has been the case in previous administrations. This was one of the key promises of the Democratic candidate during his campaign.

“Communicating directly and truthfully to the American people is one of the most important duties of a president, and this team will be entrusted with the tremendous responsibility of connecting the American people to the White House,” Mr Biden said in a statement about his communications team on Sunday.

“These qualified, experienced communicators bring diverse perspectives to their work and a shared commitment to building this country back better,” he added.

The economic choices also reflect his need to balance the different factions of the Democratic party. Ms Tanden has at times clashed with progressive Democrats and her nomination risks a backlash that could prove problematic, given that the budget director position requires Senate confirmation.

Republicans also scoffed at her selection. “Neera Tanden, who has an endless stream of disparaging comments about the Republican Senators’ whose votes she’ll need, stands zero chance of being confirmed,” said Drew Brandewie, a spokeswoman for John Cornyn, the Texas senator.

Mr Biden’s picks for the White House council of economic advisers will be welcomed among liberals, as the economists are committed to large-scale stimulus and investment that will be partly offset by higher taxes on the wealthy.

“Simply getting back to the old normal in terms of the economy and the kind of economic policy architecture, that sets the bar far too low,” Mr Bernstein told the Financial Times in September.

Mr Biden has ploughed ahead with key appointments even though Mr Trump has failed to concede defeat in the presidential election in the face of a string of failed legal challenges to the result in key swing states. However, the president did last week give permission for the bureaucratic transition to begin, which allows incoming Biden officials to prepare for their arrival at government agencies in January.

The announcement of Mr Biden’s communications team came as he sustained an injury to his foot after slipping while playing with his dog.

The accident resulted in small fractures that would “likely require a walking boot for several weeks”, according to a statement from Dr Kevin O’Connor of GW Medical Faculty Associates released by the president-elect’s office. – Copyright The Financial Times Limited 2020