Neurosurgeon Leopoldo Luque says he will not be held responsible for the death of Diego Maradona, after Argentine justice officials seized files from his office as part of their investigation into the recent death of the football star. Video: Reuters 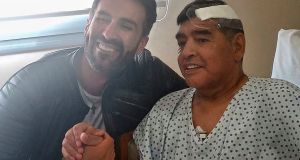 Argentine justice officials on Sunday seized medical files from the doctor of Diego Maradona as part of their investigation into the recent death of the soccer star.

Maradona died at age 60 on Wednesday after a heart attack.

The search was requested by prosecutors in the rich Buenos Aires suburb of San Isidro. The prosecutor’s office said in a statement that no charges had been brought against the doctor, Leopoldo Luque, or anyone else, but the investigation would continue.

“We have started to analyse the material that was taken” from Dr Luque’s home and office, the statement said. It did not provide information on what prompted the investigation.

“There was no medical error,” he said, adding that he was not responsible for the death of the man who led Argentina to the 1986 World Cup.

Dr Luque said he was not Maradona’s chief physician, but part of a medical team.

Maradona had surgery on a blood clot on the brain earlier in November.

The player’s lawyer, Matias Moria, on Thursday said he would ask for a full investigation of the circumstances of the soccer superstar’s death, criticising what he said was a slow response by emergency service.

Dr Luque said faster ambulance service would not have saved Maradona’s life. “You would have needed medical equipment at his house, including a respirator,” he told reporters. – Reuters/AP