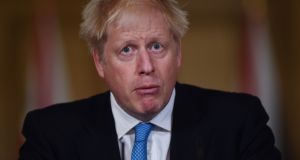 Britain’s prime minister Boris Johnson: “He is a prime minister with advisers out of control, looking for political stunts to reinforce the insurgent nature of Brexit, happy to sacrifice the rule of law...” Photograph: Eddie Mulholland

The Internal Market Bill, which would allow British ministers to renege on parts of the Brexit withdrawal agreement, has begun its passage through the House of Lords with a series of blistering speeches denouncing it as an assault on the rule of law. Igor Judge, a former chief justice of England and Wales, tabled a “motion of regret” saying the Bill would undermine the rule of law and damage Britain’s reputation.

“When those responsible for making the law – that is, us the parliament, we the lawmakers, who expect people to obey the laws we make – knowingly grant power to the executive to break the law, that incursion is not small. The rule of law is not merely undermined, it is subverted,” he said.

“There is one consequence, and the damage is to our standing in the world. We have no real power now, except soft power – the English language and an understanding that we in this country have a traditional belief in the rule of law and we respect it. We hope that, one day, all the countries in the world that do not have respect for the rule of law will have it. Yet here we are, about to tear it into tatters.”

The Bill, which passed all its stages in the House of Commons last month, gives ministers the power to break international law by setting aside the Brexit withdrawal agreement to determine unilaterally how parts of the Northern Ireland protocol should be implemented. The withdrawal agreement says a joint committee should decide how to implement the protocol and sets out an arbitration system for resolving disputes.

The government saw off a Conservative backbench rebellion in the Commons by promising MPs a vote before the treaty-breaking clauses are triggered. But former Conservative leader Michael Howard, a leading Brexiteer, said he would vote against the clauses.

‘Advisers out of control’

Former Labour attorney general Charles Falconer said the protocol was a guarantee that the Border would remain open and that without it, closing the Border was the only way to protect the integrity of the EU single market. And he dismissed as “beyond reason” Boris Johnson’s assertion that paperwork accompanying goods moving between Northern Ireland and Great Britain was a threat to the integrity of the United Kingdom.

“He is a prime minister with advisers out of control, looking for political stunts to reinforce the insurgent nature of Brexit, happy to sacrifice the rule of law in the hope of a good culture wars row with Remainers and some screeching headlines, and oblivious to the consequences to the standing of the UK, its long-term relationship with the EU countries and the security and safety of those who live in Ireland,” he said.

“The defenders of the rule of law in government have been forced out, or are too desperate to hold on to the offices into which they have been over-promoted to speak out as they should.”