US election: The New York enclave that exposes media myths about Trumpism 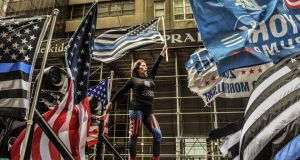 Welcome to Trumpland. At the junction of Main Street and Broadway, a majority-maskless crowd of a couple of hundred start cheering lustily as a black Chevy Suburban looms into view.

“We love you Mr President!” shouts one fan.

“Four more years,” chant just about all of them.

Behind the faux president, a noisy cavalcade of Harley-Davidson motorcycles, pick-up trucks, Jeeps and cars stretches for miles. In the sunshine of a glorious October Saturday morning, the revving engines are soundtracking Trumpalozza – a motorised MAGA rally.

The president won the county by almost seven points in 2016, and judging by the rabidity of his followers will probably do so again next month

Each vehicle is festooned with giant American flags, with a solitary, lonely Irish Tricolour billowing forlornly, looking out of place amid so much red, white and blue. Every SUV displays some sort of garish Trump banner; one shows him proudly standing on a tank, machine gun to hand, backgrounded by explosions and a swooping American eagle. Like a war hero in a suit.

“We are going to take Suffolk County, ” says the actor playing the man who received five deferments from the Vietnam draft, the fifth of those due to, ahem, painful bone spurs in his heels.

The spectators roar on the ersatz Donald because this is Suffolk County, Long Island. It’s home to 1.4 million people, three world-renowned scientific research institutions, seven college campuses, and some of the most passionate Trumpers in the country. Just more than an hour’s drive from the Democratic stronghold of New York City (to which everybody from cops to Wall Street traders commutes from here), the president won the county by almost seven points in 2016, and judging by the rabidity of his followers will probably do so again next month.

With a population that is 85 per cent white, and with a median household income of $100,000 (€85,000), it has one of the most expensive zip codes in the US out in the Hamptons, yet is also speckled with pockets of real poverty. However, the sheer number of expensive cars and trucks currently trundling about the place, boasting decals of a gurning orange-faced man, expose the media myth that his voters must surely all be uneducated lumpenproles.

These are not hicks, this is not hillbilly country; the county is, however, an area that contains devout Trumpers who question the efficacy of masks, and, eh, science.

Most of his constituency here is drawn from America’s suburban middle-class. I know college professors, doctors, teachers, and small-business owners who are unrepentant Trump supporters. Some are single-issue voters. They like that he appoints anti-abortion judges or they credit him with the stock market boom that has swollen their retirement accounts. All are well aware of his foibles, lies and offensive antics, and are as curiously unmoved by them as a lot of Democrats used to be about every fresh allegation regarding Bill Clinton.

If the polls are right and Trump is going to lose the presidential election on November 3rd, news has not yet reached Suffolk County. The atmosphere in Port Jefferson last Saturday was festive, turning downright giddy when police arrested some counter-protesters who tried to block the progress of the parade as it wended its way through the neighbouring town of East Setauket.

A handful of older women, one wearing a Colin Kaepernick jersey, another carrying a Black Lives Matter flag, stepped in front of the motorcade and refused to budge.

“We’re gonna run you the f**k over if you don’t get out of the motherf**king street!” warned a female Trump supporter, standing in the sunroof of a GMC Yukon, brandishing a loudhailer.

After the cops removed the intransigents, the procession rolled on through the quaint villages of the North Shore before arriving back in Port Jefferson. Several hours after it began, some diehards were still streaming into Roger’s Frigate, a landmark ice-cream parlour near the harbour that has a giant banner hanging outside that reads: “President Trump, our prayers are with you.”

The business became a conservative cause celebre when a previous sign declaring “In Trump We Trust” fell foul of local planning laws earlier this year.

Over the past couple of months, there have been several events like the one last Saturday, including Trumpstock, a flotilla of boats sailing along the south shore of the island, and Operation Flag Drop, a convoy to Trump Tower on Fifth Avenue, a sort of pilgrimage to the mother church.

Aside from headline-grabbing weekend showpieces, a few diligent Trump supporters also keep daily vigil at the busy, four-way junction of William Floyd Parkway and Moriches-Middle Island Road in the town of Shirley. On the dank and damp day when I visited, seven of them were standing on the footpath in front of the 7-Eleven, backgrounded by the usual panoply of flags, including the thin blue line edition of the stars and stripes meant to signify solidarity with police.

Most drivers honked to show support for their stand, often accompanying the blaring with a raised fist pump or a “Go Trump” shout. A cacophonous reminder that they were preaching to the converted in Suffolk County, at least until a white Ford Explorer stopped at the traffic lights. A 20-something black man climbed halfway out the vehicle’s passenger window before extending his middle finger, repeatedly roaring “F**k Trump!” One of the Trumpers reached for an air horn and blasted it in retaliation, drowning out the critic.

A singular exchange capturing the entirety of an election campaign.