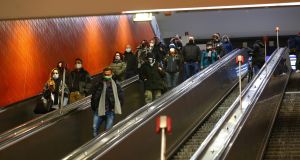 Chancellor Angela Merkel has gone over the heads of Germany’s powerful state leaders, urging citizens to cut back on social contacts to slow the spread of Covid-19.

“The pandemic is spreading rapidly again, faster than at the start more than half a year ago,” she said. “Do without every trip . . . [or] party that isn’t really necessary and, as much as possible, please stay at home and in your neighbourhood.”

Political Berlin registered the message as a vote of no-confidence in Germany’s 16 regional leaders and governments, who have led competence in most health and Covid-related matters.

This hyper-local, decentralised federal system was seen as a decisive factor in Germany getting ahead on infection track-and-tracing in the spring. But with many regions at or approaching the highest “red” level of Germany’s traffic-light warning system, no co-ordinated approach is in sight for tackling a second wave.

A seven-hour meeting between the chancellor and state leaders last week broke up without significant agreement on new restrictions or other co-ordinated measures.

According to one participant, a frustrated Dr Merkel told the meeting, “It is simply not enough, what we are doing here . . . We’ll all be back here in two weeks.”

With daily infection rates now at nearly 8,000 a day – three times the rate at the start of the month – Dr Merkel, wearing a stricken expression, begged people to heed her message, using her political credibility as capital.

Government officials said that, while the chancellor has no direct competence to intervene in state affairs, she is aware of her oath of office to “keep the German people from harm”.

As a second, winter wave looms, German politicians, business owners and courts are engaged in an ill-tempered tug-of-war over rules and restrictions. In recent days a Berlin court threw out a challenge by pub owners against an 11pm curfew. Hoteliers in several federal states have taken emergency cases at the federal constitutional court against a ban on taking in guests from hot spots. On Monday, the southwestern state of Hesse lifted its lodging ban for hotels.

A court in Munich, meanwhile, has ordered an insurance company to pay out €1.1 million in compensation to a local beer hall owner for lost earnings.

Prof Christian Drosten, a leading virologist at Berlin’s Charité clinic, says the confusion means “the population doesn’t understand the sense behind these measures, meaning the solidarity we urgently need is facing growing danger”.

On Monday Bavaria announced the first full lockdown in Germany, of the scenic Berchtesgaden region neighbouring Austria, after it registered an incidence rate of 252 cases per 100,000 population over seven days.

Across the border, Austrian chancellor Sebastian Kurz announced “unpopular but necessary” measures limiting all indoor gatherings – from dinner parties to yoga classes – to just six people. Exceptions can be made for funerals, Mr Kurz said, while the rules do not apply to sports clubs or gatherings in private homes.

“The more we hold together, and the more each individual plays along, the better we’ll get through this situation,” he said.