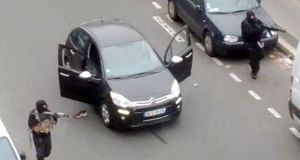 Hooded gunman Chérif Kouachi and his brother Said Kouachi aiming Kalashnikov rifles at a police officer before shooting him dead after their assault on the offices of the satirical weekly newspaper Charlie Hebdo, on January 7th, 2015, in Paris. File photograph: Jordi Mir/AFP/Getty

Three young Frenchmen, Chérif and Said Kouachi, brothers of Algerian origin, and Amedy Coulibaly, whose parents were from Mali, killed 17 people in Paris over three days in January 2015.

The three gunmen were killed almost simultaneously in two locations on the afternoon of January 9th, 2015. The trial of 14 alleged accomplices will open on Wednesday and is scheduled to last for 10 weeks.

The trial will feature 144 witnesses, 94 lawyers and 200 civil plaintiffs. It is deemed historically important enough to be videotaped in its entirety for judiciary archives.

Three of the 14 will be tried in absentia. They are Hayat Boumedienne, the wife of Coulibaly, and the brothers Mohamed and Mehdi Belhoucine. The other 11 defendants are charged with providing weapons or logistical support to the killers.

The three are believed to have had detailed foreknowledge of the Kouachis’ and Coulibaly’s plans. All fled to Syria and may have been killed in bombardments against the Islamic State group, also known as Isis.

Mohamed Belhoucine is accused of putting Coulibaly in contact with Isis leaders in Syria, and of recording Coulibaly’s videotaped claim of responsibility and oath of allegiance to the group’s then leader, Abu Bakr al-Baghdadi. He could be sentenced to life in prison.

Belhoucine’s younger brother Mehdi, if he is ever found, risks 20 years in prison for belonging to a terrorist group and for accompanying Hayat Boumedienne to Syria just before the attacks.

Boumedienne is accused of belonging to a terrorist group, of renting cars for Coulibaly and of helping to finance his actions through financial fraud. She too could be sentenced to 20 years in prison.

Coulibaly drove his wife and the Belhoucines to the airport days before the attacks. The three flew to Istanbul and made their way to Isis’s “caliphate”. Boumedienne was thought to have been killed in a bombardment, but a woman who recently returned from the al-Hol refugee camp told a French judge she escaped and has changed her identity.

Chérif Kouachi and Coulibaly became friends at Fleury-Mérogis prison. Kouachi was serving a sentence for participating in a network that sent jihadists to fight in Iraq. Coulibaly was doing time for drug dealing. Several defendants are from what is called “the laundry sect”. Serving a subsequent sentence in another prison, Coulibaly preached to prisoners in the laundry.

‘Where is Charlie Hebdo?’

France’s three-day nightmare began at 11.33am on Wednesday, January 7th, 2015 when the Kouachi brothers burst into the foyer of the building where Charlie Hebdo was produced in a discreet, unmarked second floor office. “Where is Charlie Hebdo? Tell them we’ve come from al-Qaeda in Yemen, ” they shouted as they shot dead a maintenance man.

Muslim plaintiffs had taken Charlie Hebdo to court for blasphemy in 2006, after it republished cartoons of the Prophet Muhammad from a Danish newspaper. In an act of defiance typical of the magazine, it will on Wednesday reprint the cartoons which the gunmen said they wanted to avenge.

“We will never lie down. We will never give up,” Laurent “Riss” Sourisseau, the director of Charlie Hebdo who was wounded in the attack, wrote in an editorial.

The satirical weekly mocked all religions. Richard Malka, the magazine’s lawyer and a close friend of the slain cartoonist and director Stéphane “Charb” Charbonnier, told France Inter radio that blasphemy was “the core of the reactor” at Charlie Hebdo.

Cabu, a much-loved cartoonist who was among the 12 murdered that January 7th, drew a cover of the Prophet holding his hands over his eyes, saying, “It’s hard to be loved by fools.”

In 2011, the paper was forced to move offices after an arson attack. In 2013, Inspire, an online magazine produced by al-Qaeda in the Arabian Peninsula, published a fatwa condemning Charb to death.

The Kouachi brothers forced a cartoonist who had gone outside to smoke a cigarette to enter the code for the lock on the office door. “Take us to Charb,” they ordered.

The magazine was holding its weekly editorial conference. Charb’s police bodyguard, Franck Brinsolaro, jumped to his feet and drew his pistol, but was shot dead before he could fire. The Kouachis picked off the journalists, one by one.

Luz, a cartoonist who had overslept and missed the conference, was approaching the building when the gunmen walked out “backwards, with dancer steps, as if it were choreographed”. They shouted “Allahu Akbar” and “We avenged the Prophet.”

The Kouachis killed 11 people in less than two minutes at Charlie Hebdo, then shot policeman Ahmed Merabet dead in a nearby boulevard. They crashed their car, abandoned it and hijacked another. Police found Said Kouachi’s identity card in the crashed car.

‘Smell of blood and powder’

The Paris prosecutor François Molins was one of the first to reach the scene of the massacre. The conference room looked like a battlefield, Molins told France Inter radio. “There was a powerful smell of blood and powder, a tangle of bodies.”

Helicopters and mounted police scoured forests north of Paris for the Kouachi brothers. When Coulibaly shot dead Clarissa Jean-Philippe, a West Indian policewoman, in the southern Paris suburb of Montrouge on January 8th, people wondered if there was a link with the Charlie Hebdo massacre.

On the morning of the 9th, the Kouachis abandoned their car, which had become mired in mud in the forest. They took refuge in a printing plant.

A few hours later, Coulibaly killed four men in the Hyper Cacher and took 26 other people hostage. He watched television coverage of his own and the Kouachis’ exploits throughout the four-hour hostage crisis. Coulibaly even telephoned a television station to offer live commentary.

Police were afraid that Coulibaly would resume killing hostages if they attacked the printing plant. Just before 5pm, the Kouachis ran out, shooting. The moment they were shot dead, police mounted the assault on the supermarket, where Coulibaly was killed.

Nearly six years later, Maryse Wolinski, the widow of cartoonist Georges Wolinski, remains inconsolable and angry over security lapses which she believes made the murders possible. The Kouachis were not kept under surveillance, though both were known extremists. And security for the threatened magazine had been dramatically reduced.