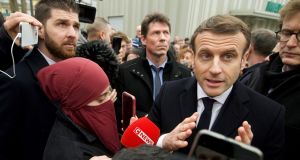 “There is no room for political Islam in France, ” Emmanuel Macron said on Tuesday at the first of several presidential outings scheduled to explain what the Élysée calls “the Republican reconquest and the fight against Islamist separatism”.

The French president spent the afternoon at a police commissariat and with neighbourhood associations in Bourtzwiller, a mostly Muslim immigrant community of 15,000 inhabitants to the north of Mulhouse, eastern France.

The non-integration of Muslim immigrant minorities is so sensitive that such ghettos are systematically referred to by the euphemisms “banlieues” (suburbs) or “quarters”.

Bourtzwiller was chosen because it is one of 47 officially labelled “quarters of republican reconquest” created since 2018. “In these quarters where delinquency and daily problems are particularly marked, additional personnel are deployed to strengthen the impact of the police,” the Élysée said.

The number of policemen patrolling Bourtzwiller has been increased from seven to 22. Bourtzwiller “has real difficulties”, Macron said, including “associations which advocate leaving the Republic, children leaving school, external influences ... ”

Macron was accompanied by the ministers of the interior, urban planning, youth and sports. The president will make at least two more appearances on the same theme, next week and after the March 15th-22nd municipal elections.

The presidential delegation did not visit the huge An-Nour mosque, whose construction in Mulhouse is being financed by a Qatari organisation. Macron intends to carry out promises by previous governments to end foreign funding of mosques.

The administration has also renewed past promises to control the training of imams and crack down on religious schools and home-schooling outside the supervision of the education ministry.

In the past two years, a controversial law on internal security has led to the closure of 152 cafes, 15 places of worship, 12 cultural and sporting clubs and four schools. The Élysée vaunted these statistics as evidence of the success of Macron’s strategy.

Under the internal security law, the dissemination of statements, ideas or theories that “incite violence, hatred or discrimination” justifies closing an establishment.

Macron has hardened his position on political Islam in office. When he was economy minister in 2015, he said: “Someone who wears a beard or has a Muslim-sounding name has four times less chance of getting a job interview than someone else.”

About 255 French people have been killed in extremist attacks since 2015. Macron is under pressure from the conservative party Les Républicains and the far-right Rassemblement National to harden his response to radical Islam. His own party is divided between moderates who advocate employment and social programmes to tame the banlieues, and those who want to crack down on all signs of religiosity.

Critics have accused Macron of unrolling his new strategy in the hope of limiting losses in next month’s elections. “I’m not going to stop working because there are municipal elections,” he said on Tuesday.

The mere choice of words has been the subject of a months-long debate. Last November, the interior ministry convened 25 officials in an urban council to advise Macron on policy towards the country’s Muslim minority. The council urged him to stop using the word “sectarianism” because Muslims felt stigmatised by it.

The president chose the term “Islamist separatism”, which for him encompasses radicalisation, political Islam and sectarianism.

Macron mingled with the crowd in front of the police commissariat in Bourtzwiller for an hour. A young man told him the neighbourhood’s residents were tired of being stigmatised.

“One must not stigmatise, because we are all French,” Macron replied. “But we must not let people leave the Republic by claiming that it does not fulfil its promises.”

“Islam is going through a crisis, with the radicalisation of some, and very hardcore movements that want to go towards political Islam. All I am saying is that in our country, there is no room for political Islam.”

A typically Macronian proposition is at the heart of his strategy of “reconquest”: if French Muslims reject political Islam and embrace the Republic, he promises to combat discrimination.