Macron pivots towards focus on human rights abuses in Egypt 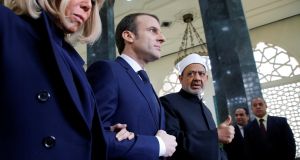 Emmanuel Macron lunched with Egyptian human rights defenders in Cairo on Tuesday at the end of a three-day visit marked by a significant shift in France’s policy towards human rights abuses in the Arab world’s most populous country.

On Monday, the French president had visibly annoyed his Egyptian counterpart Abdul Fattah al-Sisi at a press conference, by saying that Sisi ought to restore civil rights and liberties for the good of his country.

At least 60,000 Egyptians have become political prisoners since Sisi seized power in 2013, and 2,800 people were “disappeared” during the first three years of his reign, according to sources cited by Le Monde.

“Stability and lasting peace in Egypt go hand in hand with respecting individual rights and liberties within a state of law,” Macron said. “A dynamic, active, civil society remains the best rampart against extremism.”

The French leader was even more forthright with French journalists in Cairo on Sunday night. He had given Sisi a list of political opponents including “journalists, homosexuals, men and women who have convictions” when Sisi visited Paris in October 2017.

“Only two of them were freed,” Macron said. “That’s not enough. And things have got worse since.” Egyptian intellectuals and members of civil society told French officials that life under Sisi’s regime was harder than under the previous dictator, Hosni Mubarak, who was driven from office by protests in 2011.

The Irish human rights group Frontline Defenders presented a report on Egypt’s Attack on Labour Rights Defenders to French media in the run-up to Macron’s visit. Frontline’s reputation was enhanced by receiving a UN human rights prize in 2018, for efforts to protect human rights defenders.

Two days before Macron departed for Egypt, his advisers said they were unaware of the report, which focuses on the ill-treatment of workers at the Alexandria shipyard.

The majority state-owned French company Naval Group (formerly DCNS) has a €1 billion contract to build Gowind naval corvettes for the Egyptian defence ministry at the shipyard. Naval Group has signed more than €3 billion in contracts with Egypt since 2013.

Frontline briefed the French embassy in Dublin, the Middle East desk of the French foreign ministry and members of the National Assembly from Macron’s party about the Naval Group case, which exemplifies treatment of labour rights activists across Egypt.

In May 2016, more than 2,000 workers at the shipyard staged a sit-in to demand minimum wage, safety gear and security equipment that the factory had denied them, and to protest a cut in their annual Ramadan bonus. They were locked out of the factory and about 900 permanently lost their jobs. Twenty-six civilians, including office workers and engineers with no connection to the sit-in, were placed on trial by military court, a violation of international law.

Some of the 26 were imprisoned and released only after they resigned from their jobs. All remain unemployed, out of detention but in legal limbo, still on military trial and awaiting a verdict which has been postponed 30 times.

“Whether you’re in prison or free without a job, either way, your family has no money for food,” Nagi Rashad, a labour rights defender and grain mill worker in Cairo told Frontline, illustrating what the group calls “the weaponisation of poverty”.

Frontline Defenders applauded Macron’s criticism of Sisi’s human rights record. “It is absolutely useful and it absolutely does change the dynamic,” said a source who worked on the Egypt report, adding that Macron’s statements boosted morale among Egyptian human rights defenders. “The public naming and shaming of violations, in particular against human rights defenders, despite the very aggressive crackdown, is a strong and important shift.”

The Frontline report highlighted deepening ties between the French embassy in Cairo, Naval Group and the Alexandria shipyard, including messages of congratulations on the completion of a corvette. “For Naval Group to sign a deal with the Egyptian ministry of defence and . . . see labour rights defenders end up on military trial and not take action is incredibly damning,” said the source at Frontline.

Frontline’s report appears to be having an impact. Naval Group said it would review the 45-page text and has invited Frontline to meet executives in coming weeks.