Britain has the option of using martial law to quell civil disorder that might ensue under a no-deal Brexit, but has no plans to exercise it according to the UK Health Minister Matt Hancock. Video: Reuters/BBC/The Andrew Marr Show 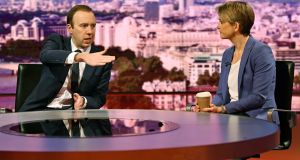 Britain’s health secretary has dismissed as “a negotiating position” the Government’s rejection of any proposal to remove or change the Northern Ireland backstop in the Brexit withdrawal agreement. Matt Hancock said Ireland would not wish to push Britain into a position that meant leaving the European Union without a deal.

“The whole purpose of the backstop is to avoid a hard border, which risks being a consequence of a no-deal Brexit. The idea the EU and the Irish Government would drive this process to a no-deal exit in order to try to achieve something which is intended to avoid no-deal Brexit, that is not going to happen,” he told the BBC’s Andrew Marr Show.

On Tuesday, MPs will debate the next steps the government should take on Brexit, with amendments proposing alternative courses of action. Senior Conservative backbenchers led by 1922 Committee chairman Graham Brady have tabled an amendment calling for Theresa May’s Brexit deal to be approved on condition that the backstop is replaced with alternative measures to prevent a hard Border.

Mr Hancock hinted that the government could support the amendment, despite the fact that the EU has made clear that its demand is unacceptable.

“I do understand the impulse behind those who are laying that amendment, and in particular the work that’s been going on to try to bring people together,” he said.

Amendments can be tabled until 10.30pm on Monday but it is for speaker John Bercow to determine which should be put to a vote. If the government puts forward its own amendment, the speaker must select it and some reports suggest that Mrs May could propose that her Brexit deal should be approved on condition that she wins further assurances on the backstop.

The amendment the government fears most is Labour backbencher Yvette Cooper’s, which would allow MPs to instruct the government to postpone Brexit if the prime minister fails to win support for a withdrawal agreement by February 26th.

Ms Cooper said she wanted to put pressure on Mrs May to get a deal through parliament and to rule out leaving the EU without a deal.

“The reason we’re in this situation is because we’ve had continued delays from the prime minister continually kicking the can down the road. And the problem is we’re still not really seeing any progress. So I hope that this does put pressure on the prime minister to sort things out by the end of February,” she said.

“But if we get to that point, she should be ruling out no deal. She should be recognising that she cannot put families across the country into a situation where there are tariffs on food, so food prices go up; where there are delays to medicines, so that people worry about their medicines and so the NHS is putting money into fridges rather than into patient care.”