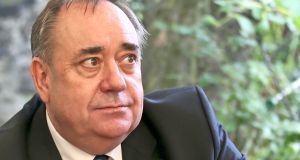 Former first minister of Scotland Alex Salmond: “I certainly have not been engaged in criminality”. Photograph: Jane Barlow/PA Wire

Scotland’s former first minister Alex Salmond has denied accusations of sexual harassment after Scottish police confirmed that they are investigating complaints against him. Mr Salmond, who has taken legal action against the Scottish government over how the complaints have been investigated, admitted on Friday that he is “no saint” and that he has flaws.

“I have made many mistakes in my life, political and personal, but I have not sexually harassed anyone and I certainly have not been engaged in criminality,” he told the BBC.

“I took the legal action I’ve taken with the greatest reluctance, for five months I’ve been going through this and my legal team have advised me that this process is defective, unjust and doesn’t allow you to state your case – you don’t get access to witnesses, you don’t see witness statements. More than that you don’t get to present your own case.”

Mr Salmond, who led the Scottish National Party (SNP) twice, was first minister from 2007 until he quit after the independence referendum in 2014. He lost his seat at Westminster in last year’s general election. His successor as first minister Nicola Sturgeon confirmed on Friday that two people had made complaints against Mr Salmond dating from his time in office at Holyrood.

“These complaints have been considered since then under a procedure covering ministers and former ministers that was agreed by me in December 2017 in the wake of public concern about harassment. Although I have been aware for some time of the fact of the investigation – initially from Alex Salmond – I have had no role in the process, and to have referred to it before now would have compromised the integrity of the internal investigation, which I was not prepared to do,” she said.

Ms Sturgeon said her relationship with Mr Salmond, with whom she served as deputy first minister, made the investigation “an extremely difficult situation” for her but insisted that due process must be followed.

“Everybody knows the length and closeness of my relationship to Alex Salmond and I think people will understand how difficult this is for me and for my party. This will be extremely upsetting to members of the SNP up and down the country. It’s a difficult situation but what is important is that complaints are treated seriously, regardless of who the person complained about is. That is a principle that cannot be applied selectively no matter how difficult that may be for me, my party or for others,” she said.

Mr Salmond was told of the allegations in March and he sought to resolve the complaints privately since then, using mediation, conciliation and arbitration. The Scottish government told him on Wednesday that they would make the complaints and the investigation public and the Daily Record reported them late on Thursday. Mr Salmond said on Friday that he is seeking a judicial review of the way the complaints have been handled.

“If I lose then I will have to answer to the complaints both comprehensively and publicly. Until then I am bound to say nothing which would impinge on the court proceedings,” he said.