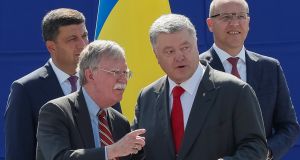 Ukraine pledged to cut all ties with Russia and to seek swifter integration with the EU and Nato on Friday, as a top US official joined Kiev’s leaders for an independence day military parade that involved troops from western armies.

“During four years of war that Russia has unleashed against Ukraine, we have preserved and strengthened the state,” Ukrainian president Petro Poroshenko said on the 27th anniversary of his country’s independence from the Soviet Union.

Speaking at a parade in Kiev of some 4,500 soldiers, 250 military vehicles and Ukrainian- and foreign-made weaponry, he said his country of 43 million people was “breaking all the ties that bind us to the Russian empire and Soviet Union”.

“To make independence irreversible, to make Ukraine great and strong, without any prospect of returning to the Russian sphere of influence – this is the main task of our generation,” he said alongside US national security adviser John Bolton.

Since an anti-corruption, pro-western revolution ousted Kremlin-backed leaders in 2014, Kiev has sought to deepen its diplomatic, economic and defence links with the EU and Nato, in the face of Moscow’s annexation of Crimea and proxy war with government forces in eastern Ukraine.

Five Ukrainian soldiers died and seven were injured in the east on Thursday.

A day after meeting his Russian counterpart Nikolai Patrushev in Geneva, Mr Bolton said in Kiev that sanctions on Moscow would “remain in force until the required change in Russian behaviour”.

He added that Ukraine had “more to accomplish” to meet the political and military requirements for Nato membership – a move that Russia says it would see as a major threat to its security, requiring a powerful response.

Mr Poroshenko said he would submit a Bill to parliament to enshrine Ukraine’s strategic goals of EU and Nato accession in the constitution, because only “such integration is a 100 per cent guarantee of our independence”.

“Europe needs us as well, because without us the European Union will not become a completed project.”

Nato and EU membership are distant prospects for Ukraine, but amid deepening co-operation with the West, soldiers from 18 other nations took part in Kiev’s biggest-ever military parade, including troops from the US, Canada, Britain and Poland.

As polls show dismal personal ratings for the head of state and little public trust towards state institutions, Mr Poroshenko is seeking a boost in popularity before parliamentary and presidential elections next year.

“President Poroshenko and I agreed that we will look at steps that the United States and Ukraine could take to look at election meddling here,” Mr Bolton said, in response to Kiev’s fears Moscow could influence those votes.

On Thursday, Mr Bolton said he “made it clear” to Mr Patrushev that the US “wouldn’t tolerate meddling in 2018”.