British prime minister Boris Johnson and leader of the opposition Jeremy Corbyn spar over Brexit, the monarchy and truth in politics during a live TV debate ahead of the UK general election. Video: ITV/Reuters 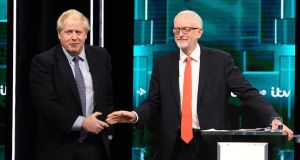 Good morning from Manchester, where the reviews are in after last night’s ITV head-to-head debate with Boris Johnson and Jeremy Corbyn. You can read my report here and my analysis here but the consensus in Salford last night was that it ended in a draw, with neither leader stumbling badly or delivering a killer blow.

A snap poll by YouGov found 51 per cent believed Johnson won the debate with 49 per cent declaring Corbyn the victor, a statistical dead heat. Sixty-seven per cent said Corbyn performed well with 59 per cent saying the same about Johnson. The prime minister came across as more likeable and more “prime ministerial”, according to the poll, while Corbyn was seen as more trustworthy and more in touch with ordinary people.

HuffPost political editor Paul Waugh thinks Corbyn should be pleased with the debate because he won several rounds of the boxing match on points and should see his party continue to rise in the polls. The problem is that Labour is running out of time to close the gap with the Conservatives as Leave voters swing behind Johnson and Remainers are divided.

In the spin room after the debate, Johnson’s team were claiming victory on the basis that Corbyn needed a game-changer and failed to achieve one. But the Conservative press office faced criticism for changing its Twitter handle during the debate to FactcheckUK, with a logo designed to make it look like an independent fact checker. On BBC’s Newsnight, party chairman James Cleverly struggled to justify the manoeuvre, which interviewer Emily Maitlis described as “dystopian”.

The campaign’s focus will now turn to the parties’ manifesto launches, with the Liberal Democrats going first this afternoon. Labour’s launch on Thursday could be a decisive moment as the party hopes to capture the public imagination with bold proposals as they did in 2017.

During the debate last night, the audience laughed at Corbyn when he tried to explain how his proposal for a four-day working week would be paid for by increased productivity. He must hope that voters will be more receptive to Labour’s radical plans when he unveils them tomorrow.

Gerry Moriarty on the controversy over posters attacking the Sinn Féin candidate in north Belfast.

Daniel Finkelstein in The Times says voting is all about social identity.

“I drive all over country, I catch a lot of aeroplanes every year, I am not a leading example” - Nigel Farage on what he does personally to protect the environment.