Brexit: Pessimism in London about prospects of crucial vote 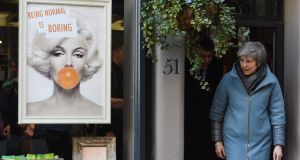 Britain’s attorney general Geoffrey Cox and Brexit secretary Stephen Barclay return to Brussels on Tuesday amid deepening pessimism at Westminster about the prospects of a crucial Brexit vote next week.

Mr Cox sought on Monday to play down a report that he is no longer seeking a time limit or a unilateral exit mechanism for the Northern Ireland backstop.

The attorney general described the Daily Telegraph report as “misunderstood fag ends dressed up as facts” but stopped short of denying it.

“Some of it is accurate, much more of it isn’t and what is not is far more significant than what is. Complex and detailed negotiations cannot be conducted in public,” he said.

Downing Street also declined to give details of the negotiations but said the attorney general “continues to pursue legally binding changes to the backstop” to ensure it cannot be indefinite.

The EU has ruled out a time limit, a unilateral exit mechanism or any change to the text of what the withdrawal agreement says about the backstop – the guarantee there will be no hard border in Ireland after Brexit.

Negotiations have focused instead on review clauses and an arbitration mechanism to determine when the conditions have been met for the backstop to end.

The prime minister is hoping Mr Cox will secure enough from the EU to allow him to change his legal advice that Britain could be kept in the backstop indefinitely.

Mr Dodds made clear this week that further assurances about the temporary nature of the backstop will not be enough to win his support for the Brexit deal.

“We know the current backstop arrangements are meant to be temporary and all the assurances in the world from the EU that they will negotiate in good faith etc – it doesn’t change that. What we need to have is legally binding change, not assurances about what we know already,” he told the BBC.

Mr Dodds said he was less concerned about the legal form of any change than that it should have legal effect and “changes the current meaning” of the withdrawal agreement and makes it clear that it cannot be indefinite.

Martin Howe, another of the lawyers on the Brexiteer panel, said on Monday that a long extension of the article 50 negotiating period would be preferable to a short extension or approving Mrs May’s deal.

Writing for the Conservative Home website, Mr Howe said a three-month extension would make no practical difference but a 21-month extension would mean that the UK would continue to have a say in EU institutions rather than simply accepting EU rules during a transition period and avoid triggering the backstop.

“The article 50 extension would give us more time to do what May’s government should have been doing all along during the 2½ years since the referendum. That is to prepare overtly, steadily and determinedly for a no-deal exit as a twin-track alongside negotiating with the EU.

“This would strengthen our negotiating position, and with May’s deal in the bin we could actually press for a deal which genuinely protects our ability to forge an independent trade policy and also deals with the Northern Ireland Border issue by alternative means,” he wrote.

Meanwhile, Taoiseach Leo Varadkar insisted that Ireland has been “very flexible and reasonable” in helping the UK to deal with problems “largely of their own creation” in the Brexit process.

He said he was “happy to offer further clarifications and assurances” to help the EU and UK negotiators get a deal done, with the planned departure date of March 29th looming.