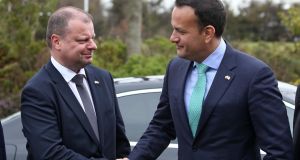 The Taoiseach has insisted that Ireland has been “very flexible and reasonable” in helping the UK to deal with problems “largely of their own creation” in the Brexit process.

Leo Varadkar said he was “happy to offer further clarifications and assurances” to help the EU and UK negotiators get a deal done, with the planned departure date of March 29th looming.

He was speaking in Dublin as British attorney general Geoffrey Cox prepared to return to Brussels for more talks following reports that he had abandoned attempts to secure a unilateral exit mechanism for the UK from the Irish border backstop, or a time limit for it.

Mr Varadkar said the Brexit talks were entering a “quite sensitive phase over the next week or two” with a House of Commons vote and European Council summit on the horizon.

Asked if he expected that Ireland would be asked to make concessions to allow a deal by March 29th, the Taoiseach said: “Ireland has been very flexible and very reasonable all along to help the UK deal with problems that are largely of their own creation.

“I am happy to offer further clarifications and assurances to help them get it over the line,” he said.

Mr Varadkar said Brexit cannot lead in any circumstances to the re-emergence of a hard border between the State and Northern Ireland.

He said the Government would support any workable mechanism that might be found which would not affect the current invisible border, or be time limited or allow unilateral withdrawal.

The Taoiseach was speaking at Farmleigh where he held a meeting with the Lithuanian prime minister Saulius Skvernelis, where Brexit and EU priorities after the UK’s exit from the union were discussed.

The Taoiseach’s comments came after the DUP and the Conservative Party’s pro-Brexit European Research Group (ERG) made clear that they would not support the withdrawal agreement in House of Commons votes without legally binding measures in relation to the backstop.

However, the Daily Telegraph reported on Monday that Mr Cox had abandoned attempts to get a hard time limit of a unilateral mechanism for the UK to exit the backstop.

Asked about the report, UK communities secretary James Brokenshire told the BBC: “The attorney general continues with his work to ensure that we get legally binding changes to ensure that we are not locked in the backstop.”

He said Mr Cox would be “back to Brussels this week to continue the discussions to make sure that we can get those legal changes”. Mr Cox and the British Brexit secretary, Stephen Barclay, are due to meet the EU’s chief Brexit negotiator Michel Barnier, in Brussels on Tuesday.

Mr Cox is reported to be focusing on securing an enhanced “arbitration mechanism” that allows the UK or the EU to provide formal notice that the backstop should come to an end.

But Brussels is said to be resisting demands for an “independent” arbitration panel, outside the jurisdiction of the European Court of Justice.

The ERG has set out three tests by which they will judge Mr Cox’s efforts to secure changes to the backstop. – PA