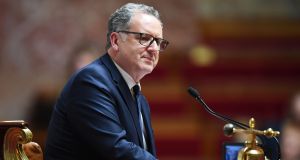 President of the French National Assembly Richard Ferrand is the fourth-ranking official in the republic. Photograph: Eric Feferberg/AFP/Getty Images

The president of the French national assembly, Richard Ferrand, has been formally placed under investigation by three judges on suspicion of illegally benefitting from his former job as the director of a semi-private health insurance company in Brittany.

Mr Ferrand is the fourth-ranking official in the French republic, and a close associate of president Emmanuel Macron. He was questioned for 13 hours in Lillefrom Wednesday into Thursday.

“The president of the national assembly is determined to continue with the task conferred on him by his political family and his voters,” Mr Ferrand announced in a statement.

Mr Ferrand added he “takes note of this procedural measure which will enable him to defend himself in this case” and said he was “serene regarding the outcome” since an earlier complaint was disallowed in October 2017. “No new element has been added to the case, which has done no damage and claimed no victim.”

The government spokeswoman, Sibeth Ndiaye, spoke for Mr Macron when she told Europe 1 radio that Mr Ferrand is “a loyal, upstanding man, whose political career has been exemplary. I believe his days [as president of the national assembly] are still very long.”

Mr Ferrand was director of the Mutuelles de Bretagne, a non-profit, co-operative health insurance group which receives some government funding, from 1998 until 2012.

In 2011, the group was looking for a place to set up a healthcare centre in Brest. Mr Ferrand’s companion, Sandrine Doucen, a lawyer, purchased a building which she then rented out to the Mutuelles de Bretagne. Ms Doucen financed the €375,000 purchase price through rent paid by the Mutuelles, making a substantial profit.

The affair was revealed by the investigative newspaper le Canard enchaîné shortly after Mr Macron’s election in May 2017. Though he was not yet under formal judiciary investigation, Mr Ferrand resigned from his post as minister for territorial cohesion.

Three cabinet ministers from the centrist party MoDem resigned at the same time, when it emerged that they were suspected of using EU funds in a fake job scheme. Sylvie Goulard, who has just been appointed EU commissioner for internal market at Mr Macron’s request, resigned as defence minister in the MoDem scandal.

The anti-corruption group Anticor has pursued Mr Ferrand for more than two years and was behind the judges’ decision in Lille. Their complaint was disallowed in Brest at the end of 2017. Anticor then filed a second case in Paris, which was transferred to Lille.

“Mr Ferrand has been claiming to have been cleared by the justice system for a year,” said Jean-Christophe Picard, the president of Anticor. “Today, we see that was false.”

The case against Mr Ferrand hinges on two legal questions. The purchase of the building by Ms Doucen and it being rented to the Mutuelles would be covered by the three-year statute of limitations, unless one considers that the facts were kept secret, in which case the three years commenced only on May 24th, 2017, when the facts were revealed. Some administrators of the Mutuelles said they knew nothing of Mr Ferrand’s relations with Ms Doucen.

Under the penal code, illegally benefiting from one’s position, the offence of which Mr Ferrand is suspected, applies only to public servants. As a non-profit co-operative with some government funding, the Mutuelles de Bretagne is arguably not a public service.

Mr Macron was elected on promises of establishing an irreproachable republic. Repeated corruption cases have been an embarrassment. François de Rugy, Mr Ferrand’s predecessor, who had been reappointed minister for ecology, was forced to resign in July in a controversy over lavish entertainment at the national assembly.

1 Ireland has strategy to ‘break the chains’ of coronavirus - WHO’s Mike Ryan
2 ‘Everyone still thinks it’s a joke’ - parents of toddler with coronavirus speak out
3 UK makes another coronavirus U-turn but doubts over strategy linger
4 Some protection equipment from China ‘not ideal’, HSE says
5 Coronavirus: Intensive care units ‘may be overrun’
Real news has value SUBSCRIBE