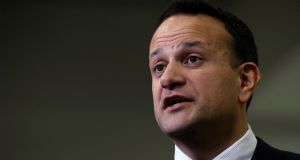 The Republic will appeal to fellow EU member states to manifest again the solidarity expressed in the Brexit talks to protect the union’s farm budget, Taoiseach Leo Varadkar said on Thursday.

Political events in Dublin delayed Mr Varadkar’s arrival in Brussels for the EU budget summit, where he was determined to protect the State’s current €1.6 billion annual receipts from the Common Agricultural Policy (Cap). Cuts proposed for the Cap in a compromise €1.09 trillion budget package from European Council president Charles Michel are expected to shave some €78 million annually off Irish receipts.

France is also demanding a restoration of the existing Cap spending. Farmers demonstrated outside the leaders’ summit on Thursday.

“I will be arguing in Brussels that Cap funding should be maintained at least at its existing level,” the Taoiseach told journalists.

“As a Government we are bringing the connections and relationships we have built in recent years across Europe through the Brexit negotiations and by staying at the heart of Europe. Our firm intention is to negotiate a reform of the Cap that benefits both rural Ireland and our environment,” he said.

The summit to broker a deal on the deadlocked discussions on the budget was due to last a day, but on Thursday night diplomats were saying it could go on until at least Saturday, and then not produce a result. The European Commission warns that unless agreement is reached soon many spending programmes will have to be suspended from early next year. Leaders met on Thursday night in a joint session and then broke up for bilateral talks that were expected to last into the night.

European Parliament president David Sassoli warned leaders that the parliament would reject any budget deal that did not give the EU the means to address the many challenges it faces. He cited climate change and tackling migration as central concerns of MEPs.

If Mr Michel’s overall proposed level of spending, at 1.074 per cent of the EU’s total gross national income (GNI), is found broadly acceptable to member states, the level of the State’s contribution to the EU will be largely non-negotiable – it, and all other national contributions, are set by reference to a formula largely dependent on the country’s income.

In the State’s case that means annual payments from Dublin are likely to rise from €2.5 billion in 2018 to €2.9 billion next year and up to more than €4 billion by the end of the seven-year budget. The State currently receives about €2 billion a year from the EU in direct payments.

To mitigate the effects of the budget on the national finances, the Government will have to focus at the summit on opposing budget cuts, particularly to agriculture funding, which contributes €4 out of every €5 the State receives from the bloc.

Tensions and a large gap in ambitions remained here on Thursday night between the demands of net contributors to the budget to curb spending, and the more ambitious spending proposals of the poorer “cohesion” countries, a commission determined to boost spending on its “green deal”, and MEPs.

Unanimity will be hard to achieve, although diplomats were saying that Mr Michel appears to have partially appeased the “cohesion” countries by redistributing structural funds. MEPs, the ultimate budget authority, are another matter.

As he went in to the leaders’ meeting on Thursday night, Dutch prime minister Mark Rutte said he appreciated the efforts of Mr Michel, a former Belgian prime minister, to broker a deal. “It’s easier to form a Belgian government than to get an EU budget,” he said, a reference to Belgium having had a caretaker government for 270 days. He might have added “or to form an Irish government”.