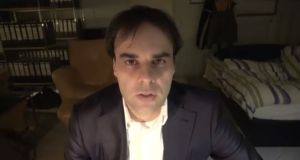 The gunman who killed nine people in the town of Hanau out of apparent hatred of minorities and turned his weapon on his own mother and then himself has been identified in German media as Tobias Rathjen, aged 43.

Born in 1977 in the Hessian town of 100,000 east of Frankfurt, Rathjen attended a local school before training as a bank clerk in Frankfurt. He took a degree in business management at the University of Bayreuth, which he completed in the spring of 2007.

There is currently no indication that Rathjen was acting as part of a wider organised network.

On what seems to have been his personal website, taken offline in the hours since the attack, Rathjen had uploaded a 24-page text in which he tells his life story, claiming that his thoughts and actions have been controlled by mind-readers working for an unnamed “intelligence agency”.

While the statement does not explicitly announce his intention to carry out an act of terror, there are lengthy passages in which Rathjen rails against ethnic minorities in Germany and announces that people of certain African, Asian and Middle Eastern origins have to be “completely annihilated” within the country.

“If there was a button available that would make this become a reality, I would press it in a flash,” he writes. Rathjen claims to have arrived at his belief from personal experiences at school and work, as well as reading newspaper reports of fights between Germans and “foreigners”.

He also mentions an act of “war”, which he says would be aimed as a “double blow” against the secret organisation he believes is watching over him and the “degeneration of the people”.

In his rambling statement, the Hanau attacker also claims to have invented the slogan “America First” and predicted the plots of numerous Hollywood movies, as well as the career of Liverpool FC’s coach, Jürgen Klopp.

A few days before the attack Rathjen uploaded an English-language video to Youtube in which he tried to warn Americans that they were controlled by devil-worshipping “secret societies”.

At about 3am in the early hours of Thursday special forces stormed Rathjen’s apartment on Helmholtzstrasse in Hanau’s western Kesselstadt district, after witnesses had spotted his getaway car parked in the street.

Inside the apartment, police discovered the bodies of Rathjen and his 72-year-old mother. The father of the family was taken in by police. In the car they found ammunition and a gun holster. Citing police sources, German media reported that Rathjen had been in possession of a hunting licence. – Guardian