Erdogan’s policies have left Ankara isolated, with Moscow one of its most reliable partners 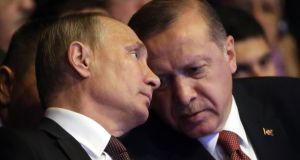 Turkey may be taking a detour from a collision course with Russia in Syria’s northwestern Idlib province.

Turkish president Recep Tayyip Erdogan had threatened to mount a military offensive against the Russian-backed Syrian army if it refuses to cease fire and withdraw from the province by the end of the month.

However, his foreign minister, Mevlut Cavusoglu, said on Thursday there has been progress in talks with Russia. Further discussions are due next week and Iran is set to host tripartite talks between Tehran, Ankara and Moscow on March 5th.

Collision has always been on the cards. Russia backs the Damascus government’s campaign to re-establish sovereignty over all of Syria, while Turkey seeks to overthrow the government and occupy strategic tracts of Syrian territory.

Russia has refused to endorse a UN Security Council call for a ceasefire in Idlib, thereby granting the Syrian army more time to obtain its military objectives in an offensive to recapture the province from anti-government and jihadi forces.

Russia is not ready for a ceasefire as long as jihadis branded by the UN as “terrorists” dominate the province, and it has repeatedly made this position clear. Foreign minister Sergei Lavrov has called for the elimination of the remaining terrorist outposts in Syria, while defence minister Sergei Shoygu said terrorist hotbeds in Idlib had to be eradicated.

Russia’s UN envoy, Vasily Nebenzya, went further when he said his country would not end support for the Syrian government as long as it faced terrorism within its territory.

Since December, the Syrian army, supported by Russian warplanes and pro- Iranian militiamen, has swept into Idlib and captured the main highway connecting Damascus with Aleppo. The army has expelled from areas it holds fighters from the al-Qaeda-linked Hay’at Tahrir al-Sham, other jihadi factions, and Turkey’s surrogate Free Syrian Army, and regained territory northwest of Aleppo city.

The army’s advance has driven 900,000 Syrian civilians towards the Turkish border, where they are trapped. Turkey, which already hosts 3.6 million Syrians, is refusing them refuge.

During recent talks, Moscow presented a map giving the Syrian government control of 60 per cent of Idlib. Erdogan responded by quadrupling the number of Turkish troops deployed in Idlib to 15,000 and threatened imminent military action.

Turkish defence minister Hulusi Akar subsequently backed off by stating: “We expect the parties [in Idlib] to comply with their commitments under the [2018] Sochi deal so that a ceasefire can be achieved.”

Russia correctly contends that Turkey has failed to meet its commitments under the deal. These include corralling jihadis and halting attacks on Syrian soldiers and civilians, surrounding Idlib with a buffer zone, and opening north-south and east-west highways in Syria. Instead, Turkey has armed jihadis and established a strong military presence in the province.

In 1971, Moscow opened its naval base in Tartous. In 2015, Russia built an airbase near the Syrian coastal city of Latakia and intervened in the Syrian civil war, enabling the government to recapture territory while boosting Russia’s standing in the region.

After a Russian warplane was downed by Turkish fighter jets in 2015, Moscow banned the import of Turkish goods, barred Turkish construction companies from work on Russian projects and warned Russians against vacationing in Turkey. These sanctions were estimated to cost Turkey $10 billion (about €9.3 billion) over 18 months.

Once sanctions were lifted, relations between Russia and Turkey blossomed. Trade between the two has risen to $25 billion a year. Russia is Turkey’s chief oil and gas supplier as US sanctions have halted Iran’s exports. Turkey is the hub for the TurkStream gas pipeline, which is already carrying Russian natural gas to Bulgaria and North Macedonia.

Turkey is also a major customer for Russian military hardware. The relationship has not only made Turkey dependent on Russia, the senior partner, but also granted Moscow leverage over Ankara.

Erdogan’s policies have isolated Turkey. His efforts to court Arab states have collapsed. His vocal support for the Palestinians has impressed neither Arab rulers nor citizens. Turkey’s aid to the Libyan government has angered Egypt, the Emirates, Saudi Arabia, France and Russia, who support Libya’s rebels.

While Turkey is shunned by the Saudis, Moscow and Riyadh co-operate in stabilising oil prices despite the Russian-Iranian alliance in Syria.

Ankara’s relations with the European Union are also strained due to Erdogan’s efforts to halt Cyprus’s exploitation of its natural gas and his threats to prevent the establishment of a pipeline to carry gas from Egypt, Israel and Cyprus to Europe.

While the US betrayed Syrian Kurdish allies by allowing Turkey to attack and seize Kurdish areas in northern Syria and has given verbal support to Erdogan during the current crisis, Erdogan cannot count on the erratic Trump administration to deliver. By contrast, Moscow has become a reliable partner.