US welcomes Kosovo's move but Belgrade plays down prospects of deal 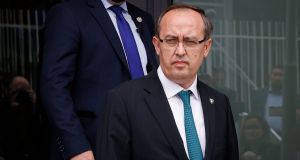 Kosovo has called for the resumption of negotiations with Belgrade to establish normal relations, but Serbia said a swift breakthrough was unlikely in a process in which the United States is playing a growing – and controversial – role.

Serbia rejects its former province’s 2008 declaration of independence, and their EU-brokered talks came to a halt in November 2018, when Pristina imposed a 100 per cent tariff on Serbian imports in response to Belgrade’s international lobbying efforts against recognition of Kosovo’s sovereignty.

“I am grateful to the government for removing the excuses that Serbia used to avoid dialogue,” said Hashim Thaci, Kosovo’s president and a leader of its ethnic Albanian rebels during their 1998-99 war with Serbian forces.

“Kosovo is clear in what it wants in dialogue. Above all, Kosovo is in this process together with the US and all other allies. We must move in that direction as soon as possible to become part of Nato and the EU,” he said on Monday.

“We are ready to immediately sit at the dialogue table,” he said. “Now we expect the same thing from the Serb side.”

Mr Hoti took power following the fall of Albin Kurti’s reformist government after less than two months in office, due to what he called a “parliamentary coup” orchestrated by Mr Thaci and backed by Mr Grenell.

The envoy strongly criticised Mr Kurti and the US froze some $50 million (€44 million) in economic aid to Kosovo when his government refused to lift the trade barriers on Serbia; those funds were released at the weekend.

Mr Kurti has said his government was toppled because “Grenell is in a rush to sign a deal with Serbia, which I strongly believe is harmful since it includes territorial exchange.”

Mr Grenell rejects suggestions that he is racing to clinch a Serbia-Kosovo deal to boost US president Donald Trump’s bid for re-election this year, or that he is advocating border changes that analysts say could destabilise the Balkans.

Mr Thaci and Serbian president Aleksandar Vucic have previously suggested that they would be open to some form of “border correction”.

Mr Vucic told Radio Free Europe on Sunday that he had now “given up on big initiatives” but expected some developments after Serbia’s parliamentary elections on June 21st.

“What should come out at the end of the dialogue?” he said. “If it’s just ‘Hey Serbs, recognise the independence of Kosovo so we can finish that story’, it will certainly not work that way.”