Family killed in US after plane crashes en route to funeral 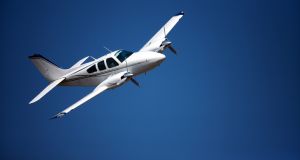 A witness said they heard a loud noise and saw an aircraft on fire. Stock photograph: Getty Images

Five people including a family with two young children travelling to a funeral have died after a plane crashed in the US state of Georgia, authorities said.

The light aircraft took off from Williston in Florda and was flying to Newcastle in Indiana when it crashed about 160km south-east of Georgia’s Atlanta, the Federal Aviation Administration (FAA) said.

Tracy Carter, a resident of Milledgeville near the crash site, told The Union-Recorder he heard a loud boom and saw a plane circling the area, catch fire and parts of it fly off into a nearby field.

The crash will be investigated by the FAA and the National Transportation Safety Board.