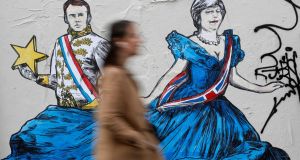 A woman walks past an art work depicting French president Emmanuel Macron and Britain’s prime minister Theresa May on a wall in Paris. Photograph: Reuters/Christian Hartmann

The request, made in a letter on Friday morning to European Council president Donald Tusk as talks continued in Westminster between her government and the opposition Labour party, will go before leaders at an EU mini-summit in Brussels on Wednesday.

While official diplomatic sources were insisting the decision was one entirely for leaders and that some clarity from London was still required, following a meeting of EU ambassadors other diplomats and EU officials were confident Mrs May would get her extension.

Paris was more cautious. Sources close to French president Emmanuel Macron were warning that talk of an extension was still premature.

“Extension is a tool, not a solution,” an Elysee source was reported as saying, insisting that they were still awaiting “a credible plan” from Mrs May.

Her attempt to woo fellow leaders was not helped by an incendiary tweet from arch-Brexiteer Jacob Rees-Mogg, playing to the fears of many leaders that if still in the EU in a few months the UK could be hugely disruptive.

“If a long extension leaves us stuck in the EU we should be as difficult a possible,” he said. “We could veto any increase in the budget, obstruct the putative EU army and block Mr Macron’s integrationist schemes.”

In her letter Mrs May tries to reassure with an almost embarrassing promise that the UK will be a constructive good member “in accordance with the duty of sincere co-operation”.

Code for “no obstruction”.

However, some diplomats were still wondering if Mrs May could commit her successor at the helm to maintain such a co-operative course.

Mrs May’s letter also appears to preempt and block one element of what is understood to be key in Labour’s talks demands – a confirmatory referendum on any joint deal. That would not be possible before June 30th, and that time limit would seem to make agreement with Labour far more difficult.

At the summit leaders are also expected to discuss to the possibility of a longer indeterminate “flextension” to allow the UK to continue its membership and then leave when a deal is agreed. The idea, being suggested by sources close to Mr Tusk, would be an offer time-limited by as much as a year.

Among member states there is no clear consensus yet about the advisability of granting any long extension, with some fearing that a loosening of deadlines will simply allow MPs to put off confronting hard choices.

Mrs May also sets out the clear parameters for any discussions with the opposition in a framework spelled out by EU negotiators.

Keen to demonstrate that the British government is adopting a new approach – also required by EU leaders – she emphasises that “if a consensus is going to be found, compromise will be needed on all sides in the national interest”.

“If the talks do not lead to a single unified approach soon the government would instead look to establish a consensus on a small number of clear options on the future relationship that could be put to the house in a series of votes to determine which course to pursue.”

Acknowledging that the June 30th date brings them past the European elections, Mrs May accepts the legal obligation on the UK to contest these if the extension is granted. It will make preparations for the contest.

However, should agreement on a deal be reached before the May 23rd polling day allowing the UK to leave the EU, the UK would then cancel the polling.

1 Covid-19: ‘Green list’ may shorten as Cabinet looks to tighten travel restrictions
2 David Trimble: After the big dinner in Oslo, somebody said why don’t we party together?
3 Five Covid-19 clusters found among Irish fruit and vegetable growers
4 Maureen Dowd: The US president and the damage done
5 John Hume, architect of peace process, dies aged 83
Real news has value SUBSCRIBE