Kremlin accuses US of backing anti-Putin rallies across Russia 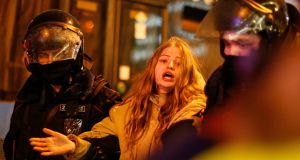 Riot police detain a woman during a protest against the jailing of opposition leader Alexei Navalny in Pushkin square in Moscow. Photograph: Alexander Zemlianichenko/AP Photo

The Kremlin has played down the importance of a day of opposition protests across Russia, and accused the United States of supporting rallies that attracted tens of thousands of people and resulted in some 3,500 arrests.

An estimated 20,000 people gathered in Moscow, more than 10,000 demonstrated in St Petersburg and smaller crowds marched in more than 100 other towns and cities across Russia on Saturday, in response to an appeal from jailed Kremlin critic Alexei Navalny.

Russian officials denounced the protests as illegal but Mr Navalny’s anti-corruption foundation called for more rallies next weekend, even as he languished in a Moscow jail after being arrested on his recent return home from Germany, where he spent five months recovering from poisoning with a nerve agent in Siberia.

“Now many will say that lots of people joined these unsanctioned protests. No, only a few people came out; many people vote for [Vladimir] Putin,” said Kremlin spokesman Dmitry Peskov.

In a sign that the case of Mr Navalny could be an early irritant in relations between the Kremlin and new US president Joe Biden, Mr Peskov also criticised American comments about Saturday’s protests.

“The United States strongly condemns the use of harsh tactics against protesters and journalists this weekend in cities throughout Russia,” said US state department spokesman Ned Price.

“We call on Russian authorities to release all those detained for exercising their universal rights and for the immediate and unconditional release of Alexei Navalny ... The United States will stand shoulder to shoulder with our allies and partners in defence of human rights – whether in Russia or wherever they come under threat.”

Mr Peskov said such comments, which were echoed by the US embassy in Moscow, were “not correct” and “indirectly constitute absolute interference in our internal affairs. That is, indirectly they constitute direct support for infringements of Russian law, support for unsanctioned protests.”

Russian foreign ministry spokeswoman Maria Zakharova also suggested there was something suspicious about a warning to US citizens posted on the US embassy in Moscow’s website, which outlined the start times and likely routes of protests in several cities.

“What was that? An arrangement or instructions?” she said. “Our American colleagues will have to explain themselves at Smolenskaya square,” she added, referring to the location of the Russian foreign ministry in central Moscow.

The European Union has also urged Russia to free Mr Navalny (44), whose call for protests was boosted by his anti-corruption foundation’s latest video report, which accuses Mr Putin of secretly owning a €1 billion palace beside the Black Sea; it has been watched more than 79 million times on YouTube in just five days.

“We will discuss on Monday next steps with EU foreign ministers,” he added, amid calls from some member states to impose new sanctions on Mr Putin’s regime.

Mr Navalny’s wife, Yulia, was among those detained in Moscow, where protesters scuffled with riot police and pelted them with salvos of snowballs.

There were also clashes in St Petersburg, where a police officer was filmed kicking a woman to the ground when she asked why he was arresting a young man. The AFP news agency said she was admitted to hospital in a serious condition with a head injury.

Mr Navalny’s team used social media to urge Russians to repeat the protests and ramp up pressure on Mr Putin: “Today was an incredible day! Thanks to everyone who took to the streets ...This was the first step towards victory. See you at the rallies in a week!”